Spurred on by a hang-up about childhood shortcomings Heaney expresses the determination that his marriage and his new direction will be successful; he is prepared to change and be changed. Faced with three seismic life-changes in his twenties (leaving behind his rural background for University in 1959; preparing his first collection of poetry after 1960; marriage in 1965), the poet identifies his wife as the force who will steer him through these rites of passage. Convinced that her support will help him grow and develop, he addresses her directly.

Heaney offers his new wife (Love) an alternative wedding vow: he will grow up and seek to improve himself (I shall perfect for you the child). He recalls his boyhood self: industrious (diligent) but not achieving anything in particular (who potters), dwarfed by the oversized farm tools to hand (digging with heavy spade and generally engaging in muddy childish fun projects: puddling through muck.

A well-meaning child annually tending his own little patch (yard long garden) and sowing for produce, he reveals his landscaping strategy (layer of sods) to protect young plants against voracious invaders (sow and pecking hen). He registers his failure: as a matter of routine (would) the trespassers found a way in and the wall collapsed.

Epic juvenile ambitions to build dams across the flowing drain were not well thought through: the muddy mess (sucking clabber) generated huge fun (splash delightedly) but his castle-like structures (my bastions of clay and mush) proved unfit for purpose (Would burst before the rising autumn rain) If this was the shape of farming life to come then it did not appeal to the maturing Heaney.

In a neat role-reversal of the first line the poet points at himself (you shall perfect for me this child). He has chosen Marie to help him outgrow the child who repeatedly failed his early farmyard tests (Whose small imperfect limits would keep breaking). Those times have gone … a poetry collection in the making, a new job … above all a wife with whom to enjoy shared parameters (new limits now), intimate togetherness within our walls and a newly avowed commitment symbolised within our golden (wedding-) ring. 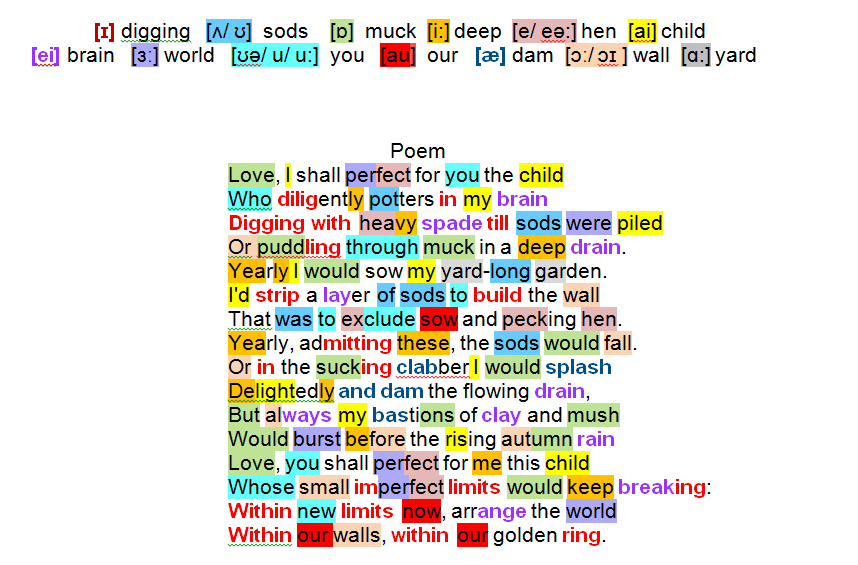