Heaney’s ageing father once left his signature mark on a Dublin beach; it will never be obliterated by the incoming tide any more than the memory of it from Heaney’s mind

Walking Sandymount Strand where Patrick Heaney once left a trail: The dotted line my father’s ashplant made. As long as Heaney lives nothing the all-powerful sea can do will succeed in effacing the memory:  something else the tide won’t wash away. 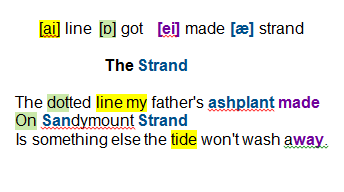