Heaney offers a version of a Marin Sorescu poem printed in ‘The Biggest Egg in the World’ (Bloodaxe 1987). Sorescu a Romanian from a humble farming background similar to Heaney’s is commenting on repressive political circumstances in his own particular way. He uses his ‘spirit level’ to establish just how much things are weighted against in a Communist state.

A poet assesses the gap between what was promised and how things have turned out; it centres on corruption (the first words got polluted) – Heaney ‘s preference for ‘got’ over ‘were’ has something peasant-class, blunt and as-everyone-round-here-knows-very-well about it.  The changing content of flowing water offers a ready- made metaphor for contamination (river water in the morning / flowing with … dirt. Sorescu is sour: the major pollutant is a Communist propaganda-tool in the shape of a state-controlled press (blurbs and … front pages) used utterly to mislead and repress the individual.

Sorescu rejects these impurities masquerading as truths. Things he can trust, very much in a Milosz sense, emanate from the inner recesses of his mind and from nowhere else (my only drink is meaning from the deep brain) and are as plain and simple as the unadulterated life-force manifested in Nature (the  birds and the grass and the stones).

His hope for the future is couched in a plea that all things warped by political circumstances be allowed to revert to their original, elemental shape (let everything flow … up to water and earth and fire and air).

Sorescu hopes that his witty message that everything in his homeland is pretty rubbish and that upward progress is too much to expect will remain beyond the comprehension of the dull-witted in charge. 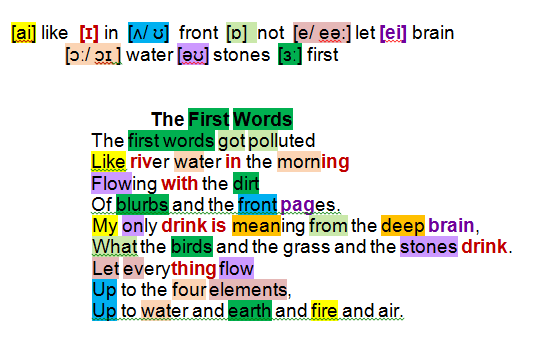