An unexpected alter-ego of a kind – Heaney recognises an alternative embodiment of his own vocation. From his travels around Co. Derry he picks out an itinerant tradesman emblematic of old Ireland and detects similarities between himself and this wandering seamster. Just as the tailor has a way with clothes so the poet has a way with words – they both spend their time making up, unpicking, altering and putting back together.

Without any warning (then all of a sudden) poetic charge can enter the poetic consciousness (appears to me) – on this occasion a remnant of old Ireland, a sharer of Heaney’s ancestry who mirrors in figurative form many of the poet’s traits (journeyman tailor who was my antecedent).

The man’s posture has something leprechaunish about it (up on a table, cross-legged) as he engages in the first stage of an alteration (ripping out a garment he must recut or resew). In similar fashion the poet drafts and redrafts pieces.

The tailor’s face intrigues him: the mouth tensed in concentration (his lips tight back) around the regulation length of cotton (thread between his teeth), his silence that of the reticent individual he is (keeping his counsel always, giving none), his gaze (eyelids) fixed and unalterable (steady as wrinkled horn or iron), living in his own world (self-absenting), itinerant yet at home with himself wherever he might be (both migrant and ensconced). How much of his own manner is Heaney beginning to recognize?

The tailor is invited (admitted) into people’s homes (kitchens) and intimate belongings (clothes) thanks to the magical talent he possesses (his touch has the power) that creates ‘new lamps’ from old (turn to cloth again).

There is nothing here that does not mirror Heaney’s status as a poet with a public voice.

Heaney is jolted (all of a sudden) into confession (he appears to me) of his own incompleteness – guarded (unopen), honourable certainly (unmendacious) but yet to define his true role (unillumined).

Heaney toasts the seamster (so more power to him) he once watched at work (on the job there) noting he was less comfortable being observed (ill at ease under my scrutiny) given his personality (years of being inscrutable) as he got on with the job (threaded needles or matched the facings, linings, hems and seams).

Heaney zooms in: needle position (just off centre); eyes narrowed for close focus (squinting); the split ends of the cotton moistened (licks the thread and licks); thread pulled firmly through the needle’s eye (sweeps it through).

After fiddly concentration, a deliberate adjustment (time to draw both ends out even), a double musical tuning of their tautness (plucking them sharply twice) then on with the job (back to stitching).

The poet wonders whether the tailor had some deeper quest (does he ever question what it all amounts to or ever will?) or just lived from one moment to the next (where he lays his head?).

If the tailor is comparable with a spiritual figure of global importance who renounced family and wealth and walked the roads of life in search of Enlightenment (my Lord Buddha of Banagher), the life lesson this seamster teaches certainly enlightened Heaney (the way Is opener for your being in it). 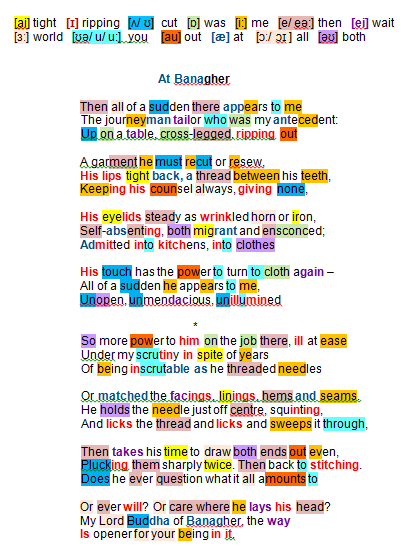