A sequence of four poems set in the living area of the Heaney family’s farm at Mossbawn.

Heaney reflected on this early period of his life in his Nobel Prize acceptance speech: In the nineteen forties, when I was the eldest child of an ever-growing family in rural Co. Derry, we crowded together in the three rooms of a traditional thatched farmstead and lived a kind of den-life. The time of innocence or ignorance will ultimately be replaced by full historical and political awareness.

Active play is unfolding: the children are all positioned (on the sofa In a line) protecting limbs from the imagined ‘outside’ (kneeling behind each other). There is both hierarchy (eldest down to youngest) and an energetic purpose: (elbows going like pistons) that gives the game away (this was a train).

The Mossbawn setting might leave them short of space (between the jamb-wall and the bedroom door) but in the childish imagination were no boundaries (our speed and distance were inestimable. Each stage dramatized and added to – ricochet movement (we shunted) and trainlike sound (we whistled); then a pretend appropriately serious inspector of real yet non-existent tickets (invisible for tickets) with appropriate actions (and very gravely punched it).

Increasing momentum, reflected by the voices (carriage after carriage under us moved faster, chooka-chook) reverberates downwards (sofa legs went giddy) . Mother, father, Aunt Mary, not part of the play (unreachable ones far out on the kitchen floor joined in the spirit (began to wave) – in line with the peculiarly British habit of waving at passing trains and passengers waving back.

Heaney’s memory darkens at the thought of 1940s’ events the youngsters could not have known about – images including the holocaust atrocities during WWII dressed as questions because they were not yet certainty (Ghost-train? Death gondola?). With hindsight the sofa’s physical make-up (carved, curved ends, black leatherette and ornate gauntness) lent itself to the image of a funeral-barge floating on a Venetian canal (the sofa had achieved flotation). Alternatively its design (braid and fluent backboard) and floor fittings like flitting courtiers (castors on tip-toe) were suggestive of a throne from which to witness outdated ceremonial display (airs of superannuated pageantry).

It played another more remote, aloof role when visitors endured it, people sitting upright (straight-backed) and not of the family (it stood off in its own remoteness).

It was the annual repository for Christmas presents reflecting wartime shortages and lack of income in large families (the insufficient toys appeared on it). Christmas mornings brought yet another image: the sofa’s shape akin to Santa’s sky-flying sleigh of myth (potentially heavenbound) a belief bound to be dashed by reality (earthbound for sure), part of a festive tradition that made sense to a child (might add up), until someone broke the Santa spell (let you down).

His focus shifts to 1940s BBC radio, the ‘wireless’ that fed information and entertainment to the youngsters born into history and ignorance. The siblings gathered (under the wireless shelf ) to listen to weekly instalments of compelling Children’s Hour westerns (Yippee-i-ay/ Sang ‘The Riders of the Range’).

Bulletins transmitted from London were forceful (HERE IS THE NEWS) delivered in impeccable King’s-English (absolute speaker) and totally at odds (a great gulf …fixed) with the mid Ulster accent of their  Castledawson farmstead (where pronunciation reigned tyrannically).

Wireless signals were plucked from the air by an aerial wire (swept from a treetop down) brought into Mossbawn in rough and ready fashion (hole bored in the windowframe). Gusty oscillations (when it moved in wind) brought frustrating variations in reception (sway of language and its furtherings) that reverberated in the air-filled spaces of their ears (swept and swayed in us) like things governed by sea-flow (nets in water). They recognized a similar sound-wave shape (abstract, lonely curve) emanating from the Castledawson line beyond the farm (distant trains), acoustic effects they were as yet too uneducated to comprehend as Heaney reminds us (history and ignorance).

The sofa-train play experience taught them to be tenacious (occupied … with all our might), long-suffering (fit for the uncomfortableness) and seeing things through (constancy … its own reward already).

The theatre of their drama-journey was sustained: one child looking out (somebody craned to the side); a second mimicked the front-men (driver or fireman wiping his dry brow) – heroes reaching the end of a punishing ordeal (one who had run the gauntlet) and, totally in role, oblivious to the rest of the world (we were the last thing on his mind).

One imagined obstacle to be navigated in pitched darkness (we sensed a tunnel coming up) – there actually was one – releasing them alongside Mossbawn (unlit carriages through fields at night).

The sofa-train routine was set – sit, eyes straight ahead and be doubly delighted (transported) … on a train and thrilled. No one broke the spell (make engine noise).

In the nineteen forties, when I was the eldest child of an ever-growing family in rural Co. Derry, we crowded together in the three rooms of a traditional thatched farmstead and lived a kind of den-life which was more or less emotionally and intellectually proofed against the outside world. It was an intimate, physical, creaturely existence in which the night sounds of the horse in the stable beyond one bedroom wall mingled with the sounds of adult conversation from the kitchen beyond the other. We took in everything that was going on, of course — rain in the trees, mice on the ceiling, a steam train rumbling along the railway line one field back from the house — but we took it in as if we were in the doze of hibernation. … With help from the radio, the nine kids left the three rooms for everywhere: “We entered history and ignorance / Under the wireless shelf. 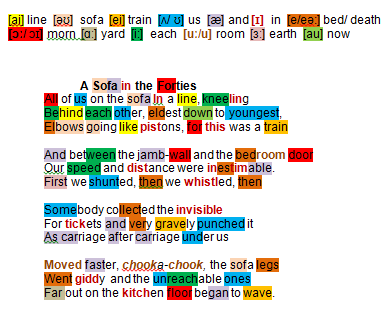