On the road out of Ardboe in Co Tyrone down towards Loch Neagh on a sharp right-hand bend, headstones are planted around a ruined church once a monastery. Views over the lough are awesome. At the entrance to the cemetery stands an impressive 10th century High Cross and behind it the site of the ‘Pin Tree’ that blew down on Christmas Eve 1997. It had been poisoned by myriad metallic objects hammered into its ‘wishing tree’ trunk.

Heaney was thinking about his wife Marie’s mother Eileen Devlin (the wishing tree that died) when he wrote the piece though he never names her. The Devlin family home was little more than two miles away from the cemetery. Eileen and Tommy Devlin are laid to rest there.

He pictures the ‘Assumption’ of the wishing tree, rocketing skywards from its location (lifted, root and branch, to heaven) exposing in its slipstream (trailing a shower) the hopes and distresses of individuals (need by need by need) that had ironically caused the tree’s downfall in the shape of metallic objects (coin and pin and nail) they embedded in its trunk (driven into its hale sap-wood and bark). In Heaney’s imagination the debris cascades down as the tree-rocket leaves the Earth’s atmosphere (streaming from it like a comet-tail) in pristine condition (new-minted) but growing ever less distinct (dissolved)

Heaney’s flight of fancy signals the passing of a woman who was ever to the fore in life (vision of an airy branch-head) witnessed by those who gathered to grieve (damp cloud of turned-up faces) close to where the tree had stood.

In a poetic sense the tree follows a similar route to the ‘soft-eyed calves’ of ‘The Milk Factory’ … somehow present in a radiant glow of absence, ‘assumed into fluorescence’; in Eileen Devlin’s case a memory-comet wandering deep space in perpetuity. 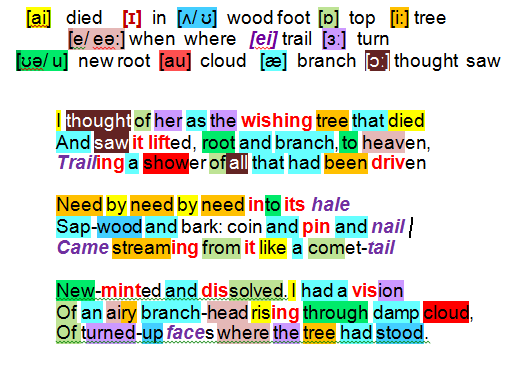