Heaney considered himself a ‘Castledawson boy’ – the village was close to his home at Mossbawn, his mother hailed from there and his maternal grandparents lived at 5 New Row. The soccer pitch on Bridge Street overlooked by Christ Church is still part of the Castledawson village landscape. Both figure in a sonnet inspired by an archive photograph of the local football side that pictured his grandfather as a young man.

The sonnet elegises not just grandad McCann. It focuses poignantly on that whole cohort of young men who turned out on Saturday afternoons in all weathers, indeed, on a whole mid Ulster era with its class structure from the local landowner down to those spent a lifetime tied to a modest living many of them in his service.

The poem’s stark final image reminds that nothing is forever but that human presence can be recorded in the eternal present of a postcard or a poem.

The eye scanning an original photograph sees: a time of day (dusk); a big, big sky (scope of air); sports’ changing facilities (railed pavilion) of standard model (formal); a lack of sharpness (blurring in the sepia); a pre WWI period (Edwardian) remembered for its good times (always summery Ulster); a reminder of British Empire abroad and at home (India or England).

Evocative, too, of state control: armed forces where men ‘fell in’ (any old parade ground), stylish period figures accustomed to obey (moustachioed tenantry), in uniform be it soccer or military (togged out), obedient of photographer’s instruction (pose with folded arms), lean and fit (musclebound), proud (staunch) and fighting to win whatever the odds (forever up against it).

Heaney hails the local boys (Moyola Park FC! Sons of Castledawson!)  celebrating the trades they stood for – railwaymen or linen workers (stokers and scutchers!).  And there central to his attention, the poet’s dearly remembered ancestor (Grandfather McCann!).

He regrets the things that are no longer (grown historical) since Grandad’s time (in your absence): the deeply-shared sense of camaraderie (team spirit); the lord’s estate (walled parkland) now part golf-course; William Clark & Sons (linen mill) no longer quite what it was; the football matches, too, sparsely attended (lightly clapped), boringly physical (dull-thumping games). 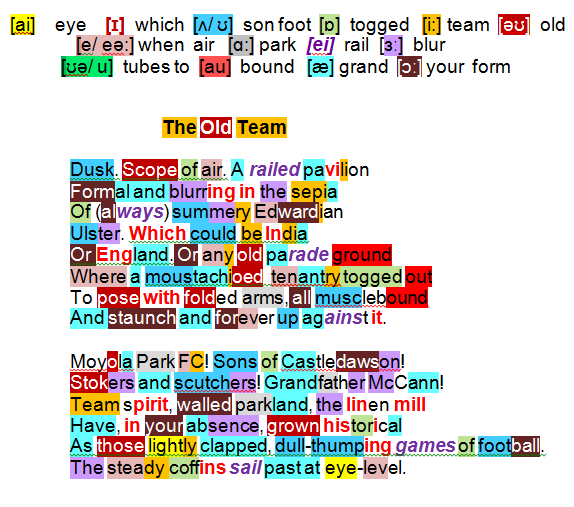