On the face of it boy-Heaney, roaming the Castledawson locality with his pals, is fascinated by the milky effluent draining into the Moyola from the Nestlé factory, an unexplored feature of the landscape. Linking the milky concoction that discoloured the river waters to its mysterious source releases Heaney’s imagination. Both the factory and the band of youngsters who looked on are figments of the past.

Playmates on a riverside walk are drawn to the lumpy, bubbly liquid (scuts of froth) eddying into the river Moyola (swirled), visual evidence of directed leakage from the Nestlé factory (drainage pipe).

The cocktail brew (milky water) generates in the poet’s imagination a Crucifixion image of sullied goodness (the pierced side of milk itself), an overflow (crock of its substance) disfiguring a science-fiction site (white limbo floors) where operatives (shift-workers) splashed their way about (waded) in ceaseless production (round the clock) on an inaccessible site (factory kept its distance). Boy Heaney’s imagination refigures the distant processing plant as a galactic space vehicle from his latest comic or film (bright-decked star-ship).

His friends and he, young animals roaming Nature freely (soft-eyed calves of the dew), impressed by what they saw (astonished) now form a radiant memory in the sky (assumed into fluorescence). 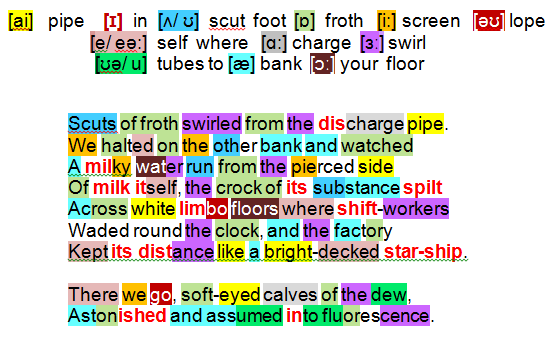