Heaney revealed to DOD (336): I loved handling the fork and the rake, their light­ness and rightness in the hand, their perfect suitedness to the jobs they had to do. It meant that the work of turning a swathe, forexample, was its own reward; angling the shaft and the tines so that the hay turned over like a woven fabric – that was an intrinsi­cally artistic challenge. Tasty work, as they say. Using the pitchfork was like playing an instrument. So much so that when you clipped and trimmed the head of a ruck, the strike of the fork on the hay made it a kind of tuning fork.

The poem is a tribute both to the king of farming implements and the father figure who taught Heaney how to use it.

Heaney places the pitchfork at the top of the league (near to an imagined perfection. He observed the proper technique: grip (he tightened his raised hand) and targeted launch (aimed with it). It resembles a weapon of classical design (javelin, accurate and light). Its exponent is at once superman  warrior … athlete and humble farmer dedicated (earnest) to the winnowing task in hand (chaff and sweat).

Heaney’s fondness for the tool derives from its visual make-up: its wood grain; its tapering shaft; its coloration (dark-flecked ash); its half-shine developed over time  (grown satiny from its own natural polish); the meeting point of natural wood and man-fashioned metal (riveted steel).

He knows about pre-production – the maturing process of  sweat-cured wood and the finishing (sharpened, balanced, tested, fitted). Optimum performance: the springiness, the clip and dart of it.

To the poetic mind the pitchfork/ javelin has infinite potential, travelling ‘ beyond …higher and higher’ like the football of Three Drawings ; he can see it it overtaking the space probes that reached the farthest …the shaft of a pitchfork sailing past, propelled effortlessly  beyond this world evenly, imperturbably … absolutely soundless, space- light glinting from its tines (prongs starlit).

Heaney’s pitchfork is a ‘tuning-fork’ for the self: from humble beginnings (simple lead) he too has surpassed his own aim, crossed a barrier to an other side. Along the way: perfection – or nearness to it – is imagined coming not from an anonymous he that gripped and thrust a pitchfork but thanks to the generous love of the father who wielded it – the opening hand. 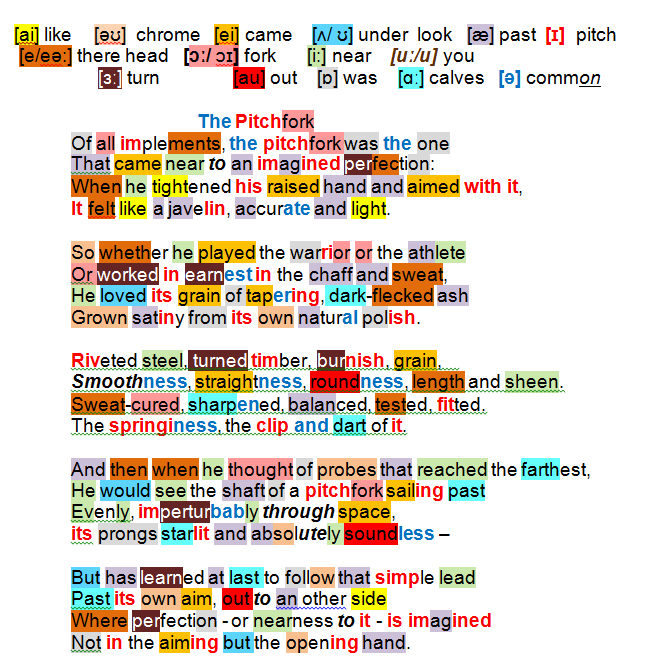