Heaney offers his reader a clue as to how to ‘enter’ the poems: You could think of every poem in ‘Squarings’ as the peg at the end of a tent-rope reaching up into the airy structure, but still with purchase on something earth­ier and more obscure (DOD 320);

The lyrical scenes (Heather and kesh and turf stacks reappear) of Heaney’s Ulster spring still to his mind Summer by summer still, sight and sound alike (grasshoppers and all).

The places he goes back to have not failed (see xli) but things have changed: the appropriation of land for development (same yet rarer fields) will come as a disppointment to the privileged ones who lived their lives out here (the nearly blessed).

Heaney pictures the overworked, underfed peat-cutters (gaunt ones in their shirtsleeves stooped and dug) who took pride in their day’s labour (stood alone at dusk surveying bog-banks) – departed souls  (Apparitions now) yet still representative-Irish (active still) … keen defenders of the tribal area (territorial), shrewd in their husbandry (sure of their ground) and still casting an eye over what happens(Still interested).

Long dead shades, unaware of the decline Heaney has noted: how far The country … has been pushed back puzzled by man’s deleterious impact on natural habitats (how long the lark has stopped outside these fields) that now seem irreversible (unstoppable to them).

Heaney, a transient presence with a rare gift of expression at his finger-tips, floods this former generation with light, warmth and reverence: Caught like a far hill in a freak of sunshine.

NC (179) perceives a ‘Squarings’ pattern: ‘For certain ones what was written may come true’ {xlv) recurs in a number of poems in the sequence … a speculative proposition gives rise to ruminative meditation which then modulates into the self-corrective production of an enduring image, emblem or figure … the afterlife is ren­dered with absolute local specificity: the dead once more ( ) are anchored in the ground of their previous dwelling. The phrase ‘heaven on earth’, that cliché of extravagant temporal fulfillment perhaps an ironic reflection  on Irish circumstances, serves now to define the only conceivable posthu­mous fulfilment too; that is, an intensification of the quotidian realities of their existences. 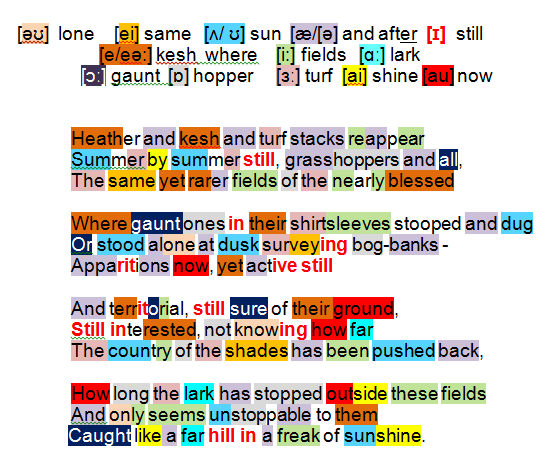