The ‘Settings’ sequence presents a chain of backdrops against which personal events and dramas were played out. Within the dynamic of Seeing Things Heaney deliberately swooped on anything that stimulated memory or association (DOD 320),  allowed himself to be transported back by the poems that ‘came on’ to the sites, moments and emotions of primary experience; his aim is to credit  ‘marvels’ that he failed to recognize first time round.

Heaney conceded in conversation with DOD (322) that the death of his father, Patrick, contributed to his sinking sense of being ‘unroofed’ at this stage in his life and may have influenced the re-evaluations that Seeing Things undertakes.

Heaney relives a moment of revelation. His sensitivity to the compositional skills required in other creative media plus his own lexical word hoard combine to produce an outstanding word-picture.

The poet has commissioned himself to strike a piece of work commemorating a rich personal memory (scene in gold), something embossed (in relief) of which he will never grow tired (So that a greedy eye cannot exhaust it).

The artist in his mind was capable both of humble rural setting (Stable straw) and desired light effects (Rembrandt-gleam and burnish) within which to place an absentee (my father) stooping (bends) over a tea-chest recycled to preserve foodstuffs(packed with salt).

The stage-set is lit centrally (hurricane lamp held up at eye-level) – his father’s pose grips with one hand (his bunched left fist) whilst the other goes about its search (foraging) for pork joints preserved by the salt (unbleeding, vivid-fleshed bacon).

The single frame becomes a moving picture: his father scrutinizes home-cured hocks pulled up into the light, weighs up each one (pondering a while) then discards some for another time (putting back).

Heaney is overwhelmed by a deep sense of gratitude and love: he feels heir to a hard-earned treasure (that night I owned the piled grain of Egypt) carefully gleaned and jealously guarded (the sentry’s torchlight on the hoard).

Watching from the darkness (unseen) Heaney’s revelation is floodlit (blazed upon).

Patrick Heaney figures in ‘Man and Boy, ‘The Ash Plant’ and the title poem ‘Seeing Things’.

In dialogue with DOD p15 Heaney sheds light: One of my abiding memories is of my father reaching down into a tea-chest full of salt and pulling out a lump of home-cured bacon. That must have been just after the end of the war and I have a feeling there was an element of contraband about it. I think it was a pig of our own that had been killed and cured and kept. He was taking out a bit to sell to a neighbour.

MP (217): A recurring presence in this ninth volume is the shade of the poet’s father, Patrick Heaney, who had featured so importantly in his first book … In Settings xv  one discovers … a worthy successor to ‘Mossbawn Sunlight’ (that celebrated Heaney’s aunt Mary);

NC (183): The self is, ‘Fosterling’ tells us, that of a poet ‘nearly fifty’, and the losses are therefore those of common biographical experience; the absences sharpen individual poems;

NC (174-5): One of the outstanding poems,Settings xv, combines a further memory of the father with this imagery of light .The self-communings (groups with shared properties) of ‘Squarings’ are modulated (changed dynamically) partly in terms of their verbal moods: their vocatives, interrogatives and imperatives derive from some traditional elegiac modes. Here, the imperative opening – ‘And strike’ – is a means partly of self-address, partly of addressing a reader, and partly a matter of suggesting some tertiary figure, a painter or sculptor, in the tradition of poetic ‘instructions to painters’…. In ‘Squar­ings’ the imagined embossing is that of a remem­bered event; and so the event, in the very act of being recounted, is transformed by becoming not merely one of the ‘settings’ of its sequence title, but already a ‘scene’, a moment transfigured into a frieze with something of Rembrandt’s effects of lighting. In fact, of course, it is the son who is the poet-painter of this scene watching unknown to the father, he has been trans­formed by what he sees, since he will carry the memory of it for the rest of his life, and it will eventually give him the splendour of this poem. The poem has great. filial affection in it; 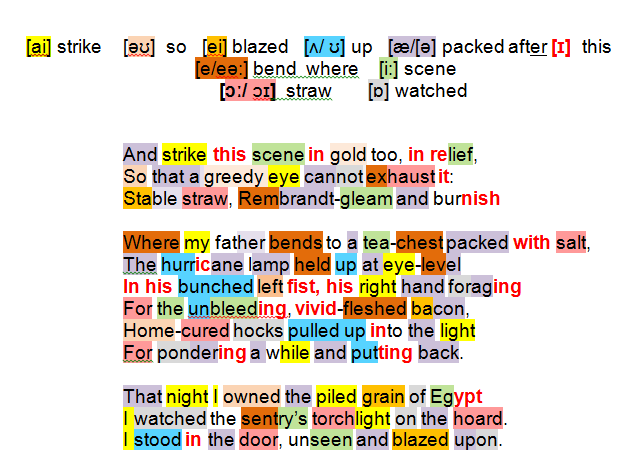