The title poem, a triptych, explores variations on the theme of ‘visibility’: a primary experience that taught of life’s impermanence; stone chiseled to produce liquid images; a telling face-to-face with a father, dead yet still alive.

Annihilation, whereby ultimately everything is reduced to nothingness, lurks ineluctably in the background.

A poem about ‘utterness’: the visibility of primary experience raised to high-definition status.

Once upon a time the infant Heaney was treated to a Sunday morning outing en famille to Inishbofin island. The scene provided a feast for his young senses: glare (Sunlight), sight and smell (turf smoke), sound (seagulls), perspective (boatslip), an invasive odour (diesel).

The individual youngsters present were handled carefully (One by one … handed down) … the boat lurched erratically dipped and shilly-shallied scaresomely … insecurity was etched on faces (tight nervous) … folk did as they were told (obedient) … nuzzled up to each other (newly close), not a word spoken except the boatmen.

The  ‘what-if-ness’ of the moment scared them – supposing the gunwales sank … they might ship water any minute. Growing steadiness was jolted when the engine kicked, even the boatman swayed for balance.

Unexpected forces (shiftiness and heft) bred panic in him, though now he understands the counter forces that kept the craft afloat (quick response and buoyancy and swim).

As they settled into the trip (sailing evenly) above crystal-clear water (still, seeable-down-into), Heaney conjured up an otherworldly way of seeing it all … hovering above it and looking down from another boat Sailing through air, far up, From there he is able to assess how riskily we fared into the morning, poignantly acknowledging the sense of life’s impermanence only visible now – the near and dear of yesteryear loved in vain because now departed this life – the bare, bowed ( ) heads  of the  nervous group of half a century before. whose days were numbered.

What kind of distance, Heaney wonders, separates objects as we see them, the ways in which they are represented and the truths they hid from me at first sight. He will perceive a graphic similarity between the ‘man-made’ stylization of a stone-carver representing water and the hieroglyphic distortions of sunlight on the human consciousness.

As he examines a detailed stone carving he chooses Claritas, an unemotional dry-eyed Latin word to best describe liquid effect (perfect for the carved tone of the water).

The carving on the façade of a cathedral depicts Jesus being baptized, up to his unwet knees. How, Heaney wonders, could a stone relief represent wetness in bright sunlight. – how could the chisel strokes of a  static art form (Lines/ Hard and thin and sinuous) be capable of giving visual movement to the river Jordan.

Just let the poetic imagination read between the lines and the river is full of life (Little antic fish ( ) all go) – that is all it takes: Nothing else.

For Heaney’s there is more – his sighting of a lifeless work of devotion and his vibrant hieroglyphic extension have produced utter visibility and given it life: The stone’s alive with what’s invisible.

He adds living detail and movement of his own (Waterweed, stirred sand-grains hurrying off) , elements that  light-bound shadowy … unshadowed stone cannot provide.

Spending all afternoon on the cathedral steps has exposed him and his wife to the shimmering heat that distorts reality (heat wavered on the step), to the point where they feel giddy (the air we stood up to our eyes in wavered).

Its flickering zig-zag shape becomes a symbol of consciousness (hieroglyph for life itself) life’s impermanence  contradicted by the enduring power of the poetic word in print.

The final poem, framed as a traditional fairy-tale (Once upon a time … happily ever after) anticipates a happy ending. The drama (Heaney never actually witnessed it) leads to a face-to-face meeting between the poet’s father, and Heaney, boy then, now a man. What happened revealed his father in a different light.

The man crossing the entrance to the Mossbawn farmyard  was my undrowned father who had survived a life-threatening accident by the skin of his teeth.  His job to spray potatoes had been fraught with danger (horse-sprayer… too big … new-fangled, bluestone … burn me …  horse … fresh…  scare) sufficient to leave young Heaney at home.

The resentful youngster threw stones at a bird on the shed roof (regarded by superstitious locals as a bad omen) in order to let off steam (for the clatter of the stones).

Patrick Heaney’s return is witnessed from inside the family dwelling (out the window), the ‘narrow-screen’ ploy that Heaney will adopt frequently in the collection.

What he sees is at total odds with his previous image of his dad: a man as if concussed (scatter-eyed), fearful (daunted), disoriented (his step unguided) … the ‘shadow’ of his former self (his ghosthood immanent).

The dynamics of the drama are recorded as in a screen-play: the relative normality of the start … sudden danger (horse had rusted and reared up) … ensuing mayhem: (everything off balance … whole rig … deep whirlpool). Every last detail is caught on camera (hoof, chain, shafts, cartwheel, barrel and tackle), everything engulfed by the river as if tumbling off the world … except for the unmistakable symbol of his father’s presence the hat … merrily swept along the quiet reaches.

No need for Heaney, Aeneas-like, to descend into the netherworld in search of his father: he came to me with his damp footprints out of the river.

The near disaster has reduced the filial image of his father as superman (I saw him face to face) to that of a sorry figure in need of support. Barriers between father and son were instantly swept away (nothing between us there); new feelings that might not still be happily ever after destined to endure beyond death’s intrusion memorialized in a poem.

The piece has revealed a shift: With the passing of time, awe of the living father has given way to an affectionate acceptance of a fellow man, flawed and mortal like himself (MP217). 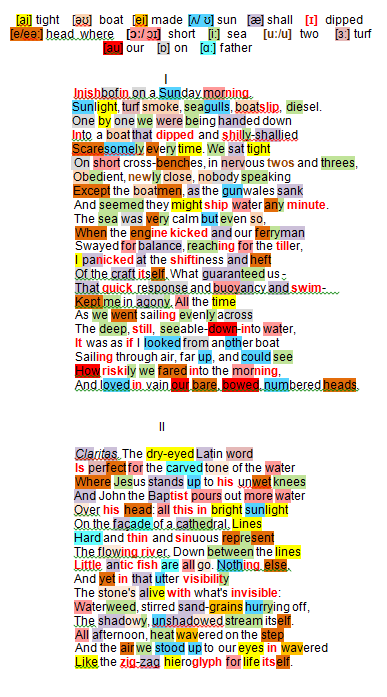 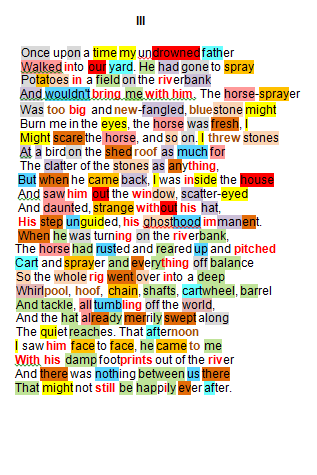