Heaney offered his reader a clue as to how to ‘enter’ the Squarings poems: You could think of every poem in ‘Squarings’ as the peg at the end of a tent-rope reaching up into the airy structure, but still with purchase on something earth­ier and more obscure (DOD 320).

Heaney composes a study in the production, transmission, reception and effects of sound as it impacts on a pleasure moment. The transcendental sounds of a dramatic performance ascend through the roofless structure of an earth-bound arena into infinite space.

He is watching an open-air performance in a Roman theatre. As the spectacle develops he becomes fascinated by the acoustic. The ocean of sound produced by the sea of faces looking down on the central acting space is gradually overtaken by a deeper, as yet shapeless, music (another/ Stronger groundswell coming through). Heaney has heard this pervasive intensity somewhere before: the steady message in a shell/ Held to the ear in earshot of the sea.

The sound resolves into the wavelengths of speech (words being spoken on the scene) bouncing off the stage’s physical obstacles (Resonating up through the walls of urns).

The sound ebbs and flows: flux (arrived) followed by reflux (cordoned air rolled back), in tidal highs and lows of classical delivery (wave upon wave/ Of classic mouthfuls amplified and faded.

Perched high up on a tribune, beneath the sky, the poet experiences the electric surge linking earth-bound with infinite space (how airy and how earthed ) – a live current (Bare to the world), dizzying (light-headed), fast moving (volatile), held together across rise and fall (tides) or when one phrase pauses before the next: (the rests in … music). 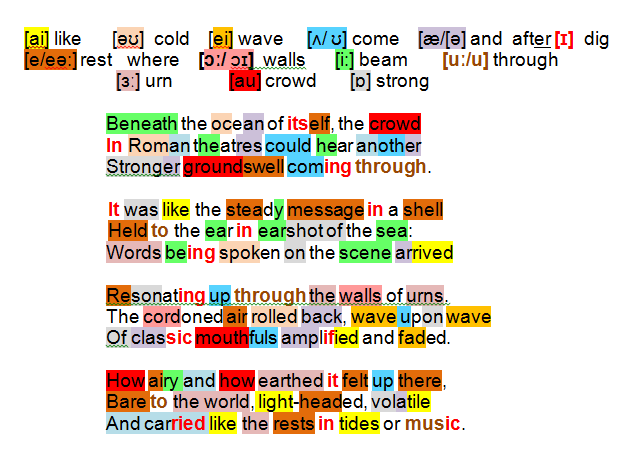