Crossings xxxiii from Seeing Things of 1991 is closely linked to The Butts. Both poems are set specifically at The Wood farm inherited from great-uncle Hughie into which the family moved from Mossbawn following the death of the poet’s brother Christopher in 1953.

In the earlier poem the removal of his father’s personal effects from the deserted farmhouse (what had been emptied out) had completed an ‘unroofing’ process that closed the door on a chapter of Heaney’s life that had included parents (turning your back and leaving),

Those feelings have lain and matured over nearly a decade. His father’s ‘plain, big, straight ordinary’ design for the house he built and lived in as a widower are reflected in the lack of fanciness Heaney discovers in the dead man’s wardrobe literally redolent with reminders of his active existence leading his thoughts to the family’s shared pain as they cared for the dying man too sick to look after himself.

His father’s every-day wear revealed his formality, stature (suits … broad and short) and body shape (slightly bandy-sleeved) hanging in orderly two-dimensional fashion (flattened back against themselves) and suggestive of Paddy Heaney’s natural aloofness (a bit stand-offish).

Moving from visual to remnant odours triggered a set of involuntary memories in Heaney who saw himself ‘invading’ his father’s wardrobe and, thereby, his privacy.

Tobacco and under-arm odours (stale smoke and oxter- sweat) had persisted and marinated in the enclosed space (came at you … stirred-up brew).

Heaney allowed himself to search more closely (reached in) – the full impact of its implied intimacy will be confirmed before the poem is over.

His eyes took in the range (rake) of heavy, durable fabrics (thornproof and blue serge) required for rough Irish farming environments. The unison of their back-and-to momentum provided  Heaney with a rivery comparison (like waterweed disturbed).

His nose coped with a paradox (sniffed tonic unfreshness), something  unwholesome serving as a catalyst to poetry.

Initial observation moved via touch to intrusion (delved) as if, without scruple, he was entering spaces where private secrets might be hidden (the forbidden handfuls) only to discover that his father had nothing much to hide (empty-handedness transpired).

Pressing his nose into the clothing (suit-cloth … against my face) revealed textures (layered stuff that surged and gave) and relative temperature (cold smooth pocket-lining); rummaging revealed old cigarette ends of finely ground tobacco (chaff cocoons) and a thin dryness (paperiness) recalling the feel of his father’s skin when the last days came.

The sick man’s terminal decline entailed an invasion of his privacy with which his children were unfamiliar (learn to reach well in) as they cared for his wasting body (each meagre armpit … feeling his lightness). The washing process (sponge him … dab and work) included very personal areas and caused them some unease (closer than anybody liked).

The process was never queried (for all that) because it fell within the children’s duty of intensive loving care to keep working. 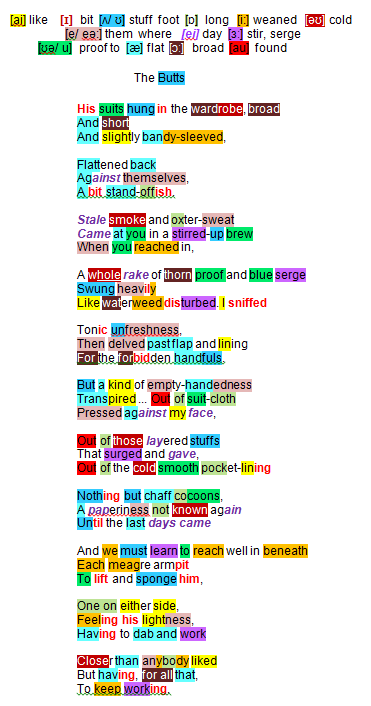