Heaney recalls a moment pivotal to his recovery from stroke (in 2006 in a Co Donegal guesthouse) describing the moment when Nature’s external show of energy kick-started his own internal engine.

The poem builds in Heaney’s certainty (Had I not been awake) that he would not have been conscious of his next poetic spark (I would have missed it). There is a further dimension – within the consciousness of an agnostic poet over 70 years of age, lies the knowledge that departing this world will bring everything to a close.

Sleep inducing treatment has rendered moments of consciousness more fleeting and increasingly important; ‘reawakening’ generates a new-found impetus that replaces a mind-set of physical and mental frailty, even fear.

Heaney’s senses were super alert to the buffetings of Nature’s strength – to the recognisable sound variations of strength and movement (wind that rose and eddied whirled) and the ability to translate sound (patter) into a sense-picture (quick leaves) with its dual suggestion of uncontrolled staccato and aliveness.

What he senses from his sick-bed is sufficient to stir him (a-patter) mind and body (the whole of me) from his mind-set of incapacity towards the pre-existent life-force and instincts of a mid-Ulster, Castledawson farmer’s boy (alive and ticking like an electric fence).

Relief and exultation are worth the repetition.

Heaney ponders the vital yet transitory (came and went) moment – unanticipated (unexpectedly) even premature (dangerously), urging him run-before-he-could-walk (Occupational Therapists were in fact required to teach Heaney how to walk) at the risk of him threatening his health.

Nature’s show of strength has awakened a powerful farmer’s boy instinct within him (returning like an animal to the house), a strong message of instrumental brass proportion (courier blast) – a squall that immediately (there and then) died away (lapsed ordinary) but left its allegorical mark: Heaney might be a mere mortal (not ever after) but he still has things to say (not now).

Heaney has a point to prove – I am  a poet still alive and kicking, he tells us, and here is something that will outlive its creator. 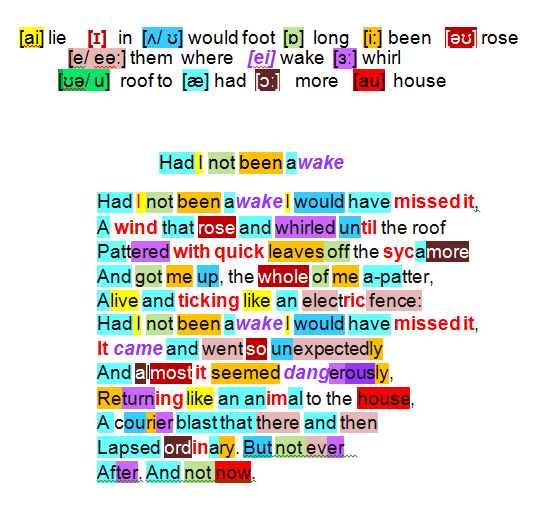