Heaney dedicates this elegiac sequence to the memory of Colin Middleton the eminent Irish artist who described himself as the only surrealist painter of his time in Ireland. Born in Belfast in 1910 he died at the end of 1983. He became a friend of the Heaneys even selling them a piece of his work (thirty guineas forty-odd years ago).

i Heaney describes the correspondence he perceived between Middleton’s gaze (smoke … already in his eyes) – alluding cleverly to both to his abstract technique and  his tobacco addiction – and the intensity with which the contortion of his artist’s eye (the way he’d narrow them to size you up) made Heaney feel like subject matter (a canvas all the while).

He recalls the chain smoker (all the while) adept at rolling his own cigarettes (licking and sealing) dealing perfunctorily with smoking residues (each small ash increment flicked off) resembling elements (as white as flecks on the horizon line) of the Loughanure painting in the Heaney house that has lived on (with provenance and price) after the artist’s death.

When Middleton visited and took a fresh look his work it was as the potential critic he ever was (gazing, grunting) … and in this particular case well disposed (nodding).

Further background: ‘In Small Townlands’ of  Death of a Naturalist portrays Heaney watching Colin Middleton executing a landscape in his own very personal style. The poem creates its own word-canvas of the painting in progress reporting the transformations Middleton imposes en route. Often preoccupied with his own issues of poetic composition and personal imprint on his poems, Heaney observes the techniques and overlays of a creative act exercised within another medium.

ii  As he considers an artefact that has outlived its creator (afterlife) Heaney wonders about the fate of humans post mortem.

The original landscape sits in his home (on the wall) unmistakably Middleton in conception (cloud-boil of grey weather … like murky crystal) and recalling the one-off gaze of his friend deceased (a remembered stare).

What chance is there of returning from the other side of death? The poet compares his here-and-now sense of mortality with two classical giants (Dante of the Inferno and Plato’s Er myth of The Republic) who imagined the happy possibility of re-incarnation (watched immortal souls choose lives to come), not just the privilege of returning but with free choice of identical or different lives (fulfilled or repelled by existences they’d known or suffered).

Odysseus (great, far-seeing) chose a quieter private life; Orpheus, torn to pieces by the Maenads (perished at the women’s hands) opted to float quietly down the stream (rebirth as a swan).

iii Well rehearsed in the afterlife dwelling places invented by the Virgils and Dantes of both Classical and Christian eras Heaney poses questions as to what if anything his Catholic foundation might offer him.

Impersonalising the Catholic notion of Kingdom of Heaven (‘Thy’ replaced by the) Heaney wonders whether he might still qualify. Lapsed he might be but he served a very sound apprenticeship in something that eluded his rational understanding (behind its scrim) that was instilled in him since baptism and birth (font and fontanel) and still resonated (breaks like light on water).

Seeking to know triggers the same unbalancing effect as Heaney’s memory of an extraordinary Middleton ploy – to check his composition the artist would perform an incongruous about-face (turn away from the motif) and by providing an alternative peep-hole (spread his legs, bend low) upend his line of sight (look between them) to see how things looked vice versa (mystery of the hard and fast to be unveiled).

Middleton’s grotesque expression (inverted face contorting) resembled the demons of some Renaissance ‘Last-Judgment’ mural  inflicting the most degrading treatment (like an arse-kisser’s in some vision of the damned) on sinners about to be forked into hell.

Then, as if nothing was, Middleton would revert to normal (cock an eye), use his paint-brush to check his perspective (at arm’s length) and set himself up to begin composing (readying).

iv  Heaney introduces two more ‘kingdoms’ familiar to him from his middle teens onwards, the first geographical, the second make-believe: the Gaeltacht where traditional Irish language, education, customs, and folklore prevailed. The poem takes him on a journey through time and space that first led him to the Loughanure landscape hanging in the family home.

He acknowledges he missed out on earliest Rannafest acquaintance (had I had sufficient Irish) obstructing his familiarity with Irish lore (seanchas) and its link with place names (disseanchas).

Heaney’s thirst for all things Irish was not yet awakened (too young and too shy); he was unaware of a figure from distant Irish folklore (about Caoilte) who, as Heaney the poet would be, was led via his pursuits (hunting the fawn from Tory) to the supernatural subterranean home (fairy hill) of the Sidhe in the original Fianna story, where he was made welcome (wasn’t turned away), honoured (crystal chair) and entertained by a beautiful  spirit (girl with golden ringlets harped and sang).

Thus ignorance of the Irish (language) and as yet undeveloped thirst to learn more (longing) denied him the upward leap (through that cloud-swabbed air) – the narrative turns painterly – that would have opened his eyes to the Loughanure painting he stands before (far ‘Lake of the Yew Tree’ gleamed).

v  As Heaney reflects Proust-like on time lost and re-found, that early-day distance from Loughanure is no longer an issue (not all that far, as it turns out) thanks to rapid transportation and an iconic Gaeltacht landmark (Mount Errigal), ever visible (skyline … constant thing).

Observing from behind the wheel of his car Heaney’s warm feelings of belonging (unhomesick) are replaced by alienation (unbelieving) from planning reform (grant-aided) that has transformed the village face he remembers (renovated scene).

Enter the nostalgia of an elderly poet-scholar who has enjoyed life to the full delving now into his classical vocabulary hoard (the Greek word) for something strong enough (signifying) to hand him back a domain that is lost (world restored completely): sounds – known people speaking the Mother tongue (Hannah Mhór’s turkey-chortle of Irish); sights of living landscape (swan at evening over Loch an Iubhair , the  ‘Lake of the Yew Tree’ of iv); still-savoured memory tastes of brands long disappeared (Clarnico Murray’s hard iced caramels) at 1950s’ prices and weights (penny an ounce) from shops now gone (over Sharkey’s counter). 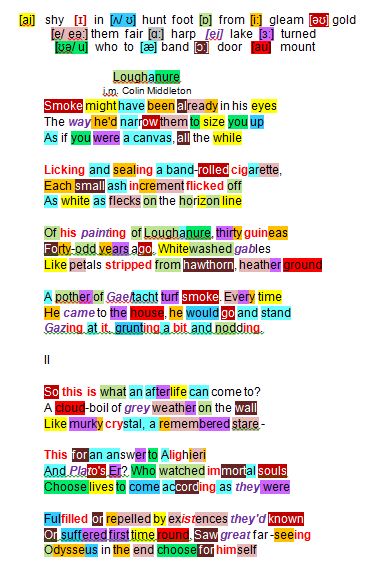 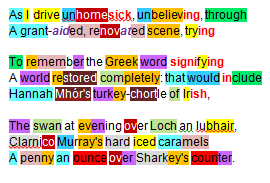