in memory of Rory Kavanagh

Heaney dedicates this touching sequence to the deceased son of a long-standing friend. The family is very well known to Heaney but only mentioned by name via the dedication. The loss of a child is completely alien to the poet.

The title’s place names are indicative both of Rory’s parental origins and of the trek the couple made to share family with their individual families.

The tears of Rory’s family and friends including the poet’s have ground to a halt (the rest of us have no weeping left).

Reading and re-reading Heaney’s poem will provide a fitting requiem (do it for you) – peat bog trees that weep (willows … on Leitrim Moss), tears visible on figurines (wounds that ‘wept’) credible to the superstitious (talk of those before you), tear-drenched memorials (rained-on statues) on the road between parental homelands (Clonmany to Ahascragh).

Heaney recalls a poignant, long-distance memory (once upon a time) from school days –himself as a schoolboy and very much alive (warm fingers), faced with the condensation on the windows of St Columb’s and drawn irresistibly to scrawl on it (make a face). He noticed how, portentously,  the gathered droplets of moisture turned the image to nought (wept itself away), trickling downwards against a dark, empty background (cold black glass).

The second piece is addressed to Rory’s father and Heaney’s enduring friend Desmond Kavanagh. The two men were at school together. The poet’s empathy for a friend overwhelmed by current personal loss prompts him to recount an incident from schooldays in which, had Kavanagh been about, his boarder’s nightmare might well have been soothed.

Heaney requests a lull in a father’s grief (compose yourself again … listen to me).  He addresses Kavanagh as if he were still in the work and sleeping space (attic study) he once occupied (unvisited by Des – never up here) on the upper floors of St Columb’s (landing … second stairwell … step-ladder), a hefty climb (steep and deep) high above the college’s coming-and-going below (down to the life going on) .

Heaney summons the absentee (even so, appear) with the promise ultimately of my good dream. Kavanagh must first sit through the lurid account of Heaney’s bad dream  when his subconscious dream-door (opened in the sleepwall) released a green tsunami (hurl of flood) that engulfed him (overwhelmed), spewing out strands of swaying algae (lithe seaweed) and sending a havoc (tumult) of nightmare-sized (immense) vegetable-flowers (green cabbage roses) tumbling into the school below (downstairs).

Heaney sensed he would survive (no feeling of drowning) the unending nightmare-deluge (attic downpour) of vegetable matter, its overwhelming intensity (no fullness could ever equal it) within its own airtight, watertight liquid bubble (flown and sealed).

He has been reluctant to set it down in writing (put it into words …I feared it would be lost) but Desmond Kavanagh’s presence (you there at the door) turns bad to good in highlighting a distress (can tell it and can weep) he can now share with his school-friend. ‘We have both come through’, he says in comfort.

Heaney paints a Kavanagh-friendly Irish Republic landscape where a father’s grief might (if ever) be soothed (wiped away) – a County Galway waters-meet (river country … confluence), remote and sparse (unmarked … road) with steeply rounded overpasses (bridge-rumped) … two watercourse, one large one small, where just to be there engulfs (floods) those passing through with ample time for reflection (plentiful solitude).

Heaney can visualize the scene he is painting: the sympathetic winter climate (unseasonable warmth), the sight of dwellings held squarely in place (battened down), the soothing overhead luminosity (oyster light).

The situation is ideal for declaring and confirming Irishness – the sound of place names unfamiliar to outsiders (unknown to most) but within Kavanagh’s reach (available to you) and pronunciation (proclaimable by you) – the local twang a God-given gift beyond all but the aficionados (like a man speaking in tongues).

Heaney  lost in thought behind the wheel of his car visualizes Des Kavanaghr in the area where Rory’s mother was brought up (Ahascragh). He is suddenly startled from reverie (brought to his senses) by a watery downfall that only Irish could describe (a sudden plout on the road). 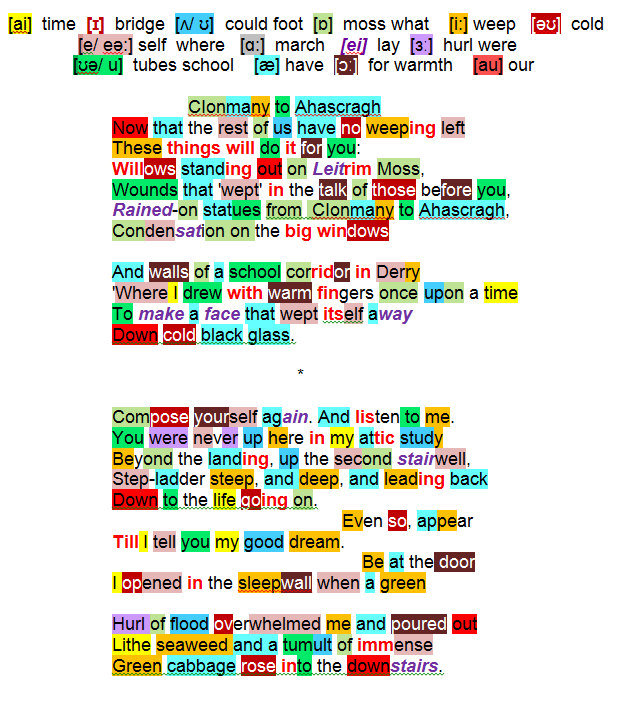 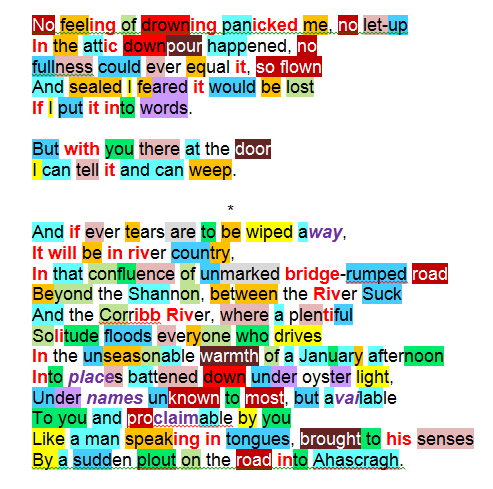