Heaney once said that returning to Northern Ireland from his US part-year teaching commitments was like pulling on ‘an old dirty glove’. In 1974 after nearly two decades of sectarian and political turbulence things reached a very low ebb. By the end of the year 1281 murders directly associated with the Troubles period had been registered.

Little wonder that the generally mild mannered Heaney, empathetic, certainly, as regards the minority Catholic cause but opposed to violence for whatever reason, was depressed and angered by what was unfolding and the way people responded.

A poster put up during the ‘Troubles’ featuring a masked, uniformed paramilitary carrying a sten-gun bore the legend: ‘Loose-talk costs lives In taxis On the phone In clubs and bars At football matches At home with friends Anywhere Whatever you say – say nothing’. Composed of amateurish cut-and-paste newspaper headings and snippets it was evidently the amateurish work of an extremist faction. It was threatening. A society is warned to refrain from unguarded political or religious comments that could cause a violent reaction.

Heaney levels his anger against propagandist threats to free speech at a time when the voices of the neutral majority should be raised in protest. Equally he deplores the imposition of repressive ‘political’ measures that fly in the face of natural justice. He acknowledges that he himself may not be practising what he preaches.

Heaney has been stung by the shallowness, insensitivity and ignorance of the British media, for whom the Troubles were merely the latest news-event. He has just emerged from a frank face-to-face (encounter) with an English journalist and smarting at the supercilious, dismissive tone of his questioner in search of ‘views on the Irish thing’.

Unremitting strife and the gloomy time of year have confined Heaney within a metaphorical lockdown (winter quarters) in which atrocity has lost its sting (bad news is no longer news).

The media-men take over – derisively authoritarian (sniff and point), their radio and television equipment scattered around ‘hired’ spaces (litter the hotels).

Everything is topsy-turvy (the times are out of joint), in view of which Heaney would place his trust more in the hope and power of prayer (rosary beads) than hackneyed repetitions (jottings) and quickly written, insensitive (scribbled) comments garbling links between escalation (long campaign), repression (gas), public dissent (protest) and violent paramilitary responses (gelignite and sten).

Heaney excoriates politicians and journalists who express no doubt as to their rectitude (proved upon their pulses), a ‘hand-on–heart’ providing Heaney with a neat alliteration. These are the guys who came up with the sound-bites and screaming headlines actually promoting violence (escalate), retaliation (backlash) severe one-sided measures (crack-down), pointing the finger at a single group (provisional wing) yet equally entrenched (polarization) and effectively fanning the flames of ‘long-standing hate’.

Amidst the clamour of those holding the ‘microphones’ Heaney’s still, small Irish voice is lost (yet I live here, I live here too). He stresses his poetic voice (I sing …).

Heaney is all too familiar with Unionist social attitudes: the veneer of politeness (expertly civil-tongued … civil neighbours); the seizure of the moral high ground (high wires) when news breaks (first wireless reports); the meal such people make of the propaganda (sucking the fake taste) and savour what is tasteless (stony flavours); the trite politically-approved clichés they trot out (sanctioned, old elaborate retorts); their opinionated judgments (disgraceful), and squeals of outrage; merchants of doom (getting worse); judge and jury (murderers) and approving of what amounts to a one-sided measure (internment, understandably).

To Heaney’s mind the voice of reason is strained to the point of extinction (the ‘voice of sanity’ is getting hoarse).

Caught up in the nasty reality of Troubled Belfast neighbourhoods (men die at hand) people could find no refuge (blasted street and home) from bombings (gelignite) endured on an almost daily basis (common sound effect).

Heaney refocuses on Catholic reactions: first hyperbole – a soccer fan treating news of his Catholic side’s win as a Vatican headline (the Pope of Rome’s a happy man tonight).

To Heaney such folk, and he falls into their category, are wimpish when it comes to turning words and feelings to direct action (tremble near the flames), too cowardly to put a match to the pyre (no truck with the actual firing). They simply set their ethics aside in pursuit of fortune or social status (we’re on the make as ever).

Conscious of their historical runtish second-class status (long sucking the hind tit) and despite the bleakness of their existence in Northern Ireland (cold as a witch’s [tit]) and disagreeable though it is (hard to swallow) they still avoid coming out openly as regards closer ties with the Irish Republic (fork-tongued on the border bit).

The voice of moderate Catholicism is muted (the liberal papist note sounds hollow) drowned out by the impact (bangs) on minds and homes in the wider Catholic community (shake all hearts and windows), unremittingly (day and night).

Heaney pauses briefly in the act of composition, tempted to rhyme on ‘labour pangs’ and weave in a metaphor of painfully recurrent Northern Irish minority Catholic destiny (rebirth in our plight).

The current (last night) so-called Marching Season heralds no let-up (you didn’t need a stethoscope) in the din of Protestant Unionism: the vulgar beats (eructation – literally ‘belching’) of Orange drums and their message of aversion (allergic) to Irish unifiers and supreme leader of the Catholic church alike (equally to Pearse and Pope).

A divided Province (on all sides) has produced a rash of factions pressing for stronger action (‘little platoons’ are mustering). Heaney gives credit for the phrase to two respected non-denominational celebrities, the first contemporaneous (Cruise O’Brien), the second of whom defied 18th century Law in his efforts to better Catholic fortunes (Backlash, Burke).

Heaney comes to the whole crux of the matter! He feels his poetic status and public voice should be active when they are not.  His conscience claims that speaking out is blocked by accursed (pestering) writer’s block (drouth for words) – so nothing from his pen, neither stick nor carrot (gaff … bait) to help him entice (lure) deeply entrenched persuasions (tribal shoals) to set down some pact in stone (epigram) and settle their differences (order).

Drouth overcome? The piece ends with a rallying cry: surely, he says, no one can fail to see through the principle obstacles (bigotry and sham) and by taking the honourable route (right line) baulk at raising a monument of non-denominational coexistence more durable than brass: aere perennius.

Heaney was not to know but it would take a further 23 years for the Good Friday Agreement to offer real prospects of peace in Northern Ireland.

Heaney exposes an offensive side within Northern Irish social groupings that probe for indelible marks of difference –  knowledge of an individual’s religion that will trigger long standing  hard-wired responses.

Heaney can see right through politically-correct claims in some circles that they avoid the contentious issue of sectarian identity altogether (never mentioned) and has learnt not to get involved (hold your tongue); such people give themselves away suggesting there is no need to probe (you know them by their eyes). He objects too to people sugaring the pill ostensibly to imply impartiality (‘One side’s as bad as the other’, never worse).

Heaney’s outrage has reached a new level (Christ) urging Catholics (discriminated against in matters of government, education, employment and housing) to reverse the customs and practices resulting from history – to puncture some small leak in the Protestant earthworks created by King Billy (great dykes the Dutchman made) that signalled the end of Catholic aspirations (dangerous tide) and its tags (Seamus – the self-identifying Catholic name that is also Heaney’s).

From his work table (sedentary trade) and given his sophistication (this art) Heaney no longer holds his tongue.

He gives himself high marks for feeble ineffectiveness (I am incapable). He is dismissive (yes, yes) of his own routine excuses: his and his fellow Catholics’ nature (Northern reticence) fear of retribution (tight gag of place), the Troubles (times).

He might be warmly attached (sing) to his northern Irish roots (‘wee six’) but speak out? Hang on a minute!

As he sees it personal salvation (to be saved) is predicated currently on people not speaking their mind (you only must save face) and obeying threats of violent retaliation (whatever you say, say nothing). Dialogue between fellow Irishmen has been stifled (smoke signals are loud-mouthed compared with us).

Then come the quasi-semiotic messages: Northern Ireland a Protestant land of password, secret handgrip, subtle movements of eye and head (wink and nod) – superficial impartiality getting on with the job of discrimination (open minds as open as a trap), preparing predatory (tongues lie coiled) disqualifications as surely as eggs are eggs (as under flames lie wicks).

Heaney finds a startling parallel from Antiquity: Greek soldiers, read Catholic equivalents (half of us), sitting tight-lipped (cabined and confined) within a symbol of cunning (wily) duplicity (wooden horse) paradoxically excluded within their own communities (besieged within the siege of Troy), voiceless lest by speaking they should betray their presence and be killed … communicating by coded gesture (whispering morse).

Heaney’s consciousness is continually bombarded with reminders that the Troubles are on-going. From behind the wheel of his car on the Northern Irish M1 he is driving past Long Kesh (new camp for the internees), not just the physical symbol of the British government’s policy of imprisonment without trial, but very real target of paramilitary riposte (bomb … crater) and bristling with defences (machine-gun posts … a real stockade).

Alongside and irrespective of the signs of violence, nature quietly defines a time of year (dewy … white mist you get on low ground).

A sudden poetic charge takes Heaney back in time (it was déjà-vu) to a seat in a cinema – some film drawn from WWII (Stalag 17) equally to do with conflict and betrayal among compatriots (a bad dream) as empty as the world beyond the windscreen (no sound).

Has Heaney room for a wry smile … the guy who chalked up his ironic comment on a wall in Ballymurphy using a neat switch of preposition (Is there a life before death)?

No! It confirmed to Heaney that he was not alone in what he thought – that life as a Northern Irishman amounted to getting by but suffering (competence with pain), enduring a life of shared, consistent gloom (coherent miseries), living off crumbs (a bite and sup).

In fact … being second class was routine within in the broader scheme of history (we hug our little destinies again). 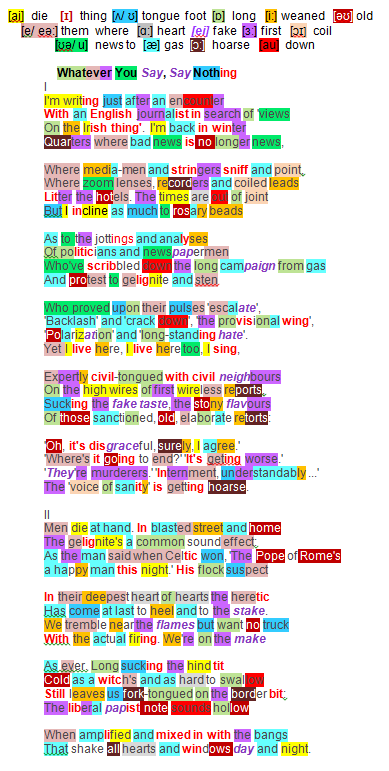 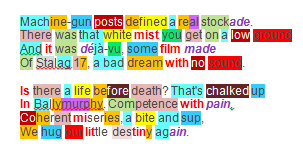