‘Against the cyclical, seasonal processes there is apprehension that our partaking in them is limited’ says Nick Laird.

The solid, repetitive sound of a vital piece of agricultural machinery delivering its annual farming bounty unearths deeper feelings in Heaney for whom a sense of mortality has crept in: about being and dying; about self; about a specific friend in memoriam.

Lying in his convalescent bed Heaney has been aware of a constant (all day … ongoing) background thud (clunk) familiar to him (baler) as unexciting as the heartbeat (cardiac-dull) and unappreciated as vital (taken for granted).

The after effect of stroke has held him in a semi-conscious state all day (evening before I came to); full consciousness restores fond memory (hearing and missing) of the farming calendar event of summer’s richest hours.

He knows the routines by heart: the intense labour (fork-lifted) , the perspiration (sweated through),  the after-burn of feeling within a whisker of perfection (nearly rewarded enough) at the sound of increased engine rhythms (race) of feverish hurry (giddied up … tractor… last-lapping) before nightfall puts paid to the process.

The sense-data richness of sight and sound (woodpigeons sued) , the mission-accomplished satisfaction (thirty gleaned acres) , the sheer physical pleasure of being (inhaling the cool) in a land of plenty (dusk Eldorado) amidst its bounty (mighty cylindrical bales) … all these factors have led Heaney to another, deeper understanding that in a sense he now shares: the feelings and responses of a man who knew his life would soon be over – ‘live’ memory of Derek Hill, already wheel-chair-bound (last time he sat at our table) unable to face the prospect of the sun going down for perhaps the last time and begging please to be put with his back to the window. 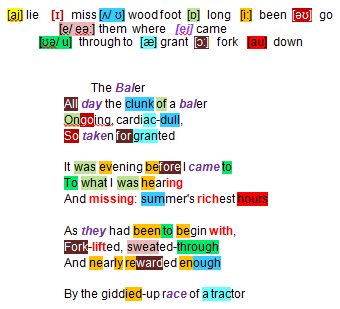