Reading Virgil’s Eclogue IV (of 42 BC) Heaney spotted correspondences with the contemporary situation in Ireland 2000 years on. The poetic charge he felt resulted in an eclogue of his own, transposing the original into a contemporary Irish setting and focussing on the elusiveness of renewal. Whilst the original Virgil eclogues tend to feature humble rural folk depressed or repressed by injustices heaped on them from above and hoping for bards to make their public case, the Heaney version brings together two wise and learned men – POET (resembling Heaney himself) and VIRGIL. Their exchanges are conducted with due respect and deference.

His Bann Valley Eclogue is designed as a song worth singing that rises like the curtain in the hope of something very momentous proceeding from Old Testament utterances pointing to life’s fate-ridden forward momentum (and it came to pass) and things that brought the ‘world’ to any given point (in the beginning).

VIRGIL provides the counselling voice (my hedge-schoolmaster) from whom POET wishes to learn. Beyond the eclogue’s standard peripatetic outdoor setting , Heaney casts a first stone at historical sectarianism: secret schools known as hedge schools (‘scoileanna scairte’) were set up from 1695 in acts of active disobedience of strict Protestant laws in Ireland which forbade Catholics from setting up schools or from sending their children abroad to school.

POET announces a child that’s due and his hope that, Christian-era heavens permitting, better times for her and her generation are in prospect.

VIRGIL’s experience of ancient Greek city-states chimes with POET’s contemporary circumstances. He sets out the cornerstones that determine positive societal outcomes: Carmen, ordo, nascitur, saeculum, gens clarifying them (their gist in your tongue) for POET’s Irish province: public creative voices of messages in song (carmen/poetry); the need for laws regulating public behaviour and obedience to authority (order), the possibility of redemption through new birth (nascitur), the spirit or mood of a particular period of history as shown by its events and beliefs (times), the ideals, shared or otherwise, of its citizens (nation) The infant, boosted by the Augean-Stables cleansing effect of the Bann’s water, will be instrumental in removing the stink of history (flooding away all the old miasma).

Recognizing the historic wrong that catapulted Catholics and Protestants, nationalists and loyalists into conflict culminating in the Troubles VIRGIL pulls no punches as regards the resultant stain: self-inflicted (you rubbed it into yourselves), intrinsically Irish (earth mark) and irremovable (birth mark) … its blood-stained mould as indelible as the memory of Romulus’s murder of his twin Remus that pitched the Roman world into civil war.

The breaking of the mother’s waters and the overflowing Bann waters will team up to wash away historical boundaries (old markings) separating predominantly Catholic west Ulster from predominantly Protestant East Ulster and the Irish Republic to the west and south of Ulster, creating a new order of shared care: washed like the new baby.

The ink on the Good Friday ‘peace’ Agreement of 1998 is barely dry … POET is not convinced that peace can be achieved overnight (Pacatum orbem: your words are too much – though he might be cautiously optimistic  – nearly), nor that such things are conceivably possible in the world he has been accustomed to (even orb by itself).

To POET superstitious omens seemed stacked against such hopes and expectations: last month, at noon – eclipse … eerie consequences (wind dropped … millenniaI chill … birdless and dark) casting doubt over the significance of the baby. However the prospect of a deliverer, a messianic  alpha (firstness steadied) and omega (lastness), to spark growing consciousness amongst the population (born awareness) of something remarkable (as name dawned into knowledge) was reason to be converted (I saw the orb).

VIRGIL cuts to the chase – ‘forget the supernatural (eclipses won’t be for this child) … this sky-born child’ will live a pure and simple infancy on an Irish farm (the pram hood over her vestal head), her humble pram wheels will be embellished by a tangle of Irish natural beauty (big dog daisies …  fanked up in the spokes). What she hears will be the sound of healthy Irish agricultural practices (the chug and slug going on in the milking parlour) and not recent close gunfire or explosions so destructive of the past.

Memory of POET’s annual chore on St Patrick’s mornings springs involuntarily to his mind – his boyhood search along the railway track for a disregarded emblem of all-Ireland (little trefoil), peerless (untouchable), transcending division. The St Patrick’s Day shamrock – ubiquitous (all over the place), unifying (twining, binding) and doggedly invasive (creepery, tough, thin roots) that brings awareness that it has not yet unified (dew- scales shook off the leaves) and unquenchable tears to POET’s eyes (tear-ducts asperging).

POET addresses the child on the way , about to land among us, born of an earth mother whose fertility matches the abundance of Irish landscape around (showing signs, out for her sunset walk among big round bales): ‘Planet earth around you floats within the grand scale of things’ (hangs by its world-chain), he tells the child, ‘visible to you even within the microcosm of your pram’ (Iike a teething ring suspended).

Time is on hold: your pram waits in the corner … life goes on (cows are let out) … daily farming routine occupies itself with cleansing and renewal: they’re sluicing the milk-house floor.

We know, little one, you have to start with a cry/ But smile soon too, a big one for your mother./Unsmiling life has had it in for people/ For far too long. But you have it in you/ Not to be wrong-footed but to first-foot us/ And, muse of the valley, give us a song worth singing.

Heaney had been commissioned to write a piece in support of the “Save the Bog Campaign” and recited it on Radio Telefis Eireann on the Millennium’s eve. 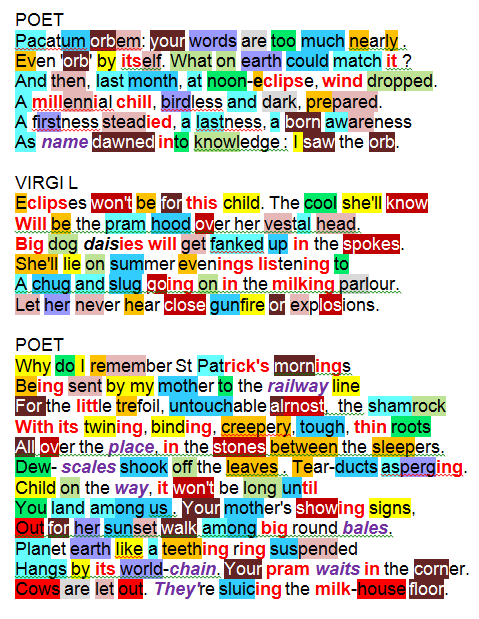