Heaney recounts the exhilaration he experiences on his return to the point where the Lower Bann river exits Lough Neagh and continues its journey northwards to the sea.

as ‘a radiant place with the’ radiant shine’ of first recall – a ‘terrific entrancement for me’ seen from the bridge as I was on the bus – an appropriate poem with which to start the collection; a miniature version of the collection as a whole ‘the poem is doing what the book is about … it pays attention, gives full acknowledgement to the usual, the data, what happens … it allows the shine of your own imagining … or the glow of whatever consciousness is to come out’.

In conversation with DOD (p.135) Heaney stressed the electrifying light effects on his senses: the aura at Toome was phenomenological rather than political. On the bridge, I was more conscious of the strong bright lumen and numen of the Bann river, the big lift of light over Lough Neagh, the wind, the strangeness of crossing wide water – for to me, in those days, the Bann seemed a wide river.

Location is key – Toomebridge (as suggested by repetition of where) is a place that awakened riches in the poet’s mind, soul and spirit.

The scene generates two responses – at once the expanse of flat water across the river and the Lough beyond (it evokes an atavistic return to pre-scientific belief – an edge of the flat earth), and the power of the flow spilling (pouring ) over the eel-fishing weir of the river beneath the bridge.

Heaney interweaves the rules of time and grammar: Bann water flow that sprang in time past far to the south of Lough Neagh is tumbling into a self-repeating now-ness, a continuous present bringing with it a numinous aura (shining).

Historical political and sectarian divisions emerge in the poet’s memory: Toomebridge was the place where the check point used to be, an erstwhile boundary between predominantly Catholic lands to the west and south and the predominantly Protestant areas to the east; also, as the mood music changes, the spot where Roddy McCorley, captured during the 1797 rebellion against the British powers-that-were was hanged in ’98 (celebrated by Ethna Carbery as a martyr for the nationalist cause in a song) …  ‘annotations’ a cautious Heaney might have called his references but distinct reminders to locals of  the Roddy McCorley monument blown up almost certainly by Protestant Ulster Volunteer paramilitaries on Jan1, 1969 prior to a civil rights march through the village and later rebuilt by the Catholic McCorley Trust.

The electric charge-bearing negative ions that release the rich tang of unpolluted air bring benefit to the poet’s body and soul (poetry to me) as does the continued presence of the ‘Eel Works’ straddling the river  … the slime and silver of the fattened eel) recalls Heaney’s visits to Ardboe on Lough Neagh when he was courting Marie in the early 60s, trips with local eel fishermen and the virtues and tastes of a creature he celebrates in poems dotted about his collections. 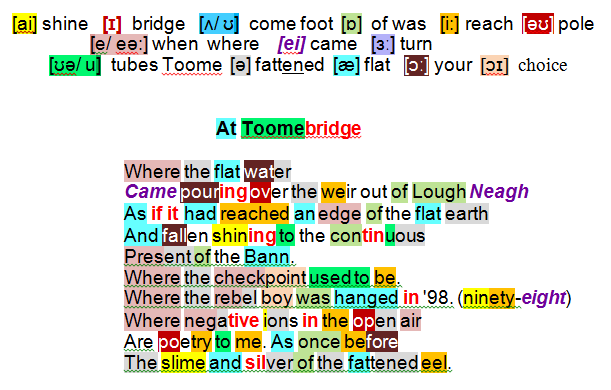