Heaney responds to an exhibit once worn by a celebrated Romantic poet in a piece about celebrity, professional respect and legacy. It offers insights into the poetic process.

On a visit to Wordsworth’s Dove Cottage near Grasmere the British Lake District, Heaney latches onto a literal and metaphorical star in the window. His initial idea takes on poetic a poetic charge that will lift Wordsworth beyond the reach of gravity

As he studies the exhibit he allows the external sounds he hears (Slate scrape. Bird or branch?) to act as  a stepping-stone to an ice-bound Lake District around 1800 and the sounds of sharp blades cutting into the smooth, frozen  Lakeland surface (the whet and scud of steel on placid  ice).

The long redundant skate-blades he was examining (bootless runners lying toppled/ In dust in a display case , the leather bindings perished brought alive a lost world and the pace and excitement of skating: the reel of them on frozen Windermere.

Only a poetic superman could have generated the energy to escape the globe’s gravitational pull as he flashed from the clutch of earth along its curve. The writings that left Wordsworth’s signature on the ‘ice’ for all to see (left it scored) gave him celestial status, made him the ‘star’ Heaney espied in the window of Dove Cottage at the outset. 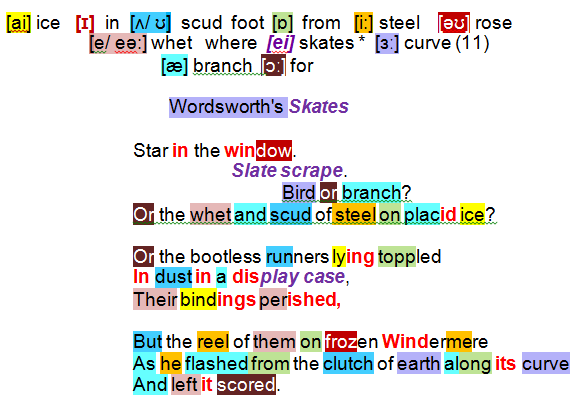