A disturbing sonnet set in Heaney’s adolescence pursues the themes of suspicion and hidden threat, reflects on the implications of being ‘recognised’ when a community is unstable and requires an armed police reserve presence  … and asks who exactly one’s ‘neighbour’ is.

A slight inclination of the head, ostensibly one of unspoken recognition, is not always what it seems.

Routine meat shopping for Sunday lunch (we would stand in line) with his father in a Saturday evening queue of folk with similar aims in mind. Young Heaney was struck by the vivid colours: red for the meat, white string and standard brown-paper ripped from a roll for packaging.

The no-frills transaction is described – Sunday joint and a shin cut for the week beyond are unceremoniously plonked down then wrapped as if in ceremonial evening-wear: bow-tied neat and clean.

Emerging vocabulary turns ominous: phrases become associated with firearms and casualties: seeping blood … dead weight in a sling (rifles have slings; dead bodies are transported in slings!). Heaney’s father shelled out, paid up in cash, a colloquial usage that extends the military metaphor.

Out in the street are uniformed civilians (local B-men), in number (thronged, lax in discipline (unbuttoned but on duty), carrying arms (neighbours with guns), flaunting  their authority (parading up and down).

The shrewd youngster picked up the vibes  – the ostensibly sociable ‘nod’, levelled by some of them at my father and yet, as if deliberately, avoiding eye to eye contact, past him.

Any suggestion of paranoia on the youngster’s behalf has a rational explanation in fact: Catholics never quite knew what the B-men were thinking or how they stood; some B-men avoided public shows of warmth, even between neighbours, in case they themselves were being watched; others who volunteered harboured within them real prejudice.  Their nod could resemble a weapon (as if deliberately they’d aimed and missed him) or they simply forgot accidentally on purpose to know him (neighbours, yes, but couldn’t seem to place him, not just then). 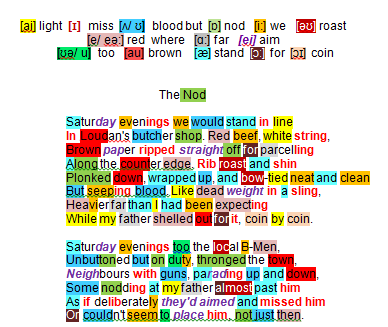