A retired couple in their domestic setting. Both the couple and the tress they have planted are at their happiest growing close together.

Heaney revealed to DOD (p.412)  that the poem is  ‘a portrait of Bernard McCabe (English academic and writer) and his wife Jane (to both of whom the Haw Lantern collection is dedicated) in a little grove they planted at the bottom of their garden in Ludlow (Shropshire, UK)’. The Heaneys and McCabes were close friends spending time abroad in each other’s company. Heaney picks out the differences between the two personalities with great subtlety.

Heaney tells us the ‘where’ – close to the babble of the river Teme in a walled off enclave akin to historical buildings left in disrepair from medieval or Tudor times (the baths or bake-house of an unroofed abbey) or remnants of earlier conquest (broken-floored Roman villa) – before he reveals the environmental credentials of the McCabes …  a newly planted birch grove.

Recently established but already putting forth in the sun, the saplings reflect the colourings (white of the bark) of the ageing couple (their own long grown-up selves) … the ‘her’, suffused and cool, with the markedly toga –like elegance (white of the satin nightdress) of the woman  gracefully engaged (she bends and straightens up) in providing refreshment.

He lolls (dandles a sandal), never still, like a clock’s movement  beating the passing seconds (on his big time-keeping foot), a monk-like foot as bare as an abbot’s adding a medieval feel to the scene.

This is in fact a couple living very much in a modern world … where housing materials (red brick and slate) and trusty standard fruit trees complete the plausibility of the scene (retain their credibility)  …  their musical taste admittedly classical (a CD of Bach) depicted as a series of expanding concentric circles flooding their space at ground level (making the rounds of the common or garden air).

In the sky above indelible signs of a less environmentally responsible kind of world-outside: a jet trail, its vapour dwindling as time passes (tapers) and oscillating almost magically (waves like a willow wand or a taper).

In the final couplet the first human communication: the academic who was reading comes out with a witty aphorism that beats the rest (trumping life with a quote) and fits the couple’s choice of life-style to a tee ‘If art teaches us anything … it’s that the human condition is private’) – in retirement, far from the madding crowd, our life is our own. 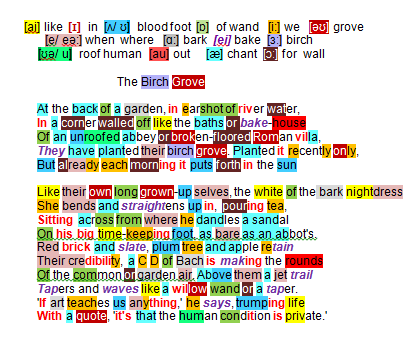