Following the first walk described in Twice Shy the relationship between Heaney and Marie Devlin has moved on; they are living together.

Heaney chooses a title of classical derivation (saying ‘farewell’, ‘adieu’) betraying his fears that her temporary absence might be more than just au revoir and signal final separation. The need Marie has kindled within him has a touch of medieval ‘courtly love’ about it, that of the knight in thrall to his Lady. The poet composes a ‘lay’ (short lyrical song) akin to those a troubadour might sing.

The poet retains the image of his departing Lady’s good taste and her appeal: frilled blouse/ And simple tartan skirt. Her absence has left a gap in both his heart and mind: emptiness has hurt/ All thought.

Sea imagery is used to compare the stability her cheerful presence brought him (like a vessel that rode easy, anchored/ On a smile) with her destabilizing absence (Rocked love’s balance) that has cast him adrift (unmoored). The interim choppy-sea days pitch and toss (buck and bound) without the sheltered haven she provided him (quiet sound/ Of your flower-tender/ Voice).

Maritime metaphor pleads for her return: ‘the void in my life is a wave crashing onto the shore (Need breaks on my strand) telling you what a mess I am in (all at sea); I beseech you to return quickly and renew your authority (resume command). Until then my whole being is in a state of open rebellion’: Self is in mutiny. 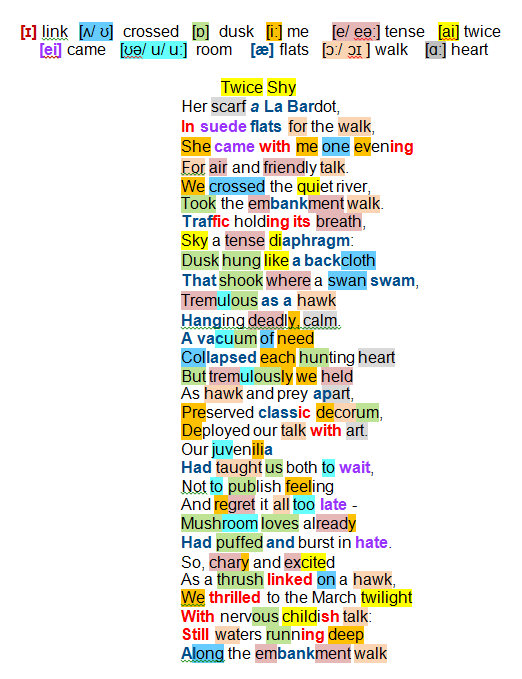