‘Digging’ was composed ‘at home’ at The Wood in 1964. Pen in hand the poet is sitting behind a window when the sight of his father provides the poetic charge.

He focuses initially on the hand holding his squat pen, the symbolic tool of the trade to which he aspires. Compared with the elegance of the spades used by father and grandfather, his pen is unglamorously short and stubby. Heaney lends the pen a small-arms image, warm and reassuring in his grasp, snug as a gun … designed to fire bullets.

The world below Heaney’s window is ‘on screen’. His attention has been attracted by the sound of digging: a clean rasping sound … into gravelly ground. The man bent at the task is his father, strenuously engaged and humorously conspicuous via his straining rump among the flowerbeds.

Heaney Senior is transplanted in the poet’s mind to an earlier time: comes up twenty years away. Any suggestions of advancing age contrast with the vitality and energy noted by the eight-year-old that Heaney was when his father worked the family farm in the mid-1940s stooping in rhythm through potato drills.

Heaney describes both the vigorous spade-work (the bright edge deep) and the emotional treasure it yielded: new potatoes that we picked/ Loving their coolness in our hands.

His respect and pride, sworn on oath by God, are extended from his father to his father’s father and the line of rural continuity that they represent.

Grandfather was a turf cutter, second to none, cutting more turf in a day/ Than any other man. Taking him refreshment, as Heaney did as a child, milk in a bottle/ Corked sloppily with paper (he deliberately selects an adverb that conveys both unpredictable liquid movement and untidy preparation) would lead to no more than a momentary break in the old man’s labour.

Heaney’s use of ‘digging’ is suddenly metaphor: his grandfather saw no alternative but to dig down and down; there were no short cuts to the good turf; no pain, no gain. The effort required applies to the poet’s task: capturing memories triggered by events, transmitting in word the smells and textures of Ireland’s landscape (The cold smell of potato mould), producing decent poems by the most effective use of stylistic devices … onomatopoeia or alliteration: the squelch and slap/ Of soggy peat.

Heaney concedes he has broken the respected family blood-line of agricultural continuity: I’ve no spade to follow men like them. His declared intention (repeating the poem’s opening) is to follow their example of hard work and, using pen not spade, earn like respect for himself in pursuit of his poetic aims: I’ll dig with it. Heaney confesses in ‘Feeling into Words’ his memory of a proverb from his childhood: ‘the pen’s lighter than the spade’. He will set out to give both equal weight. 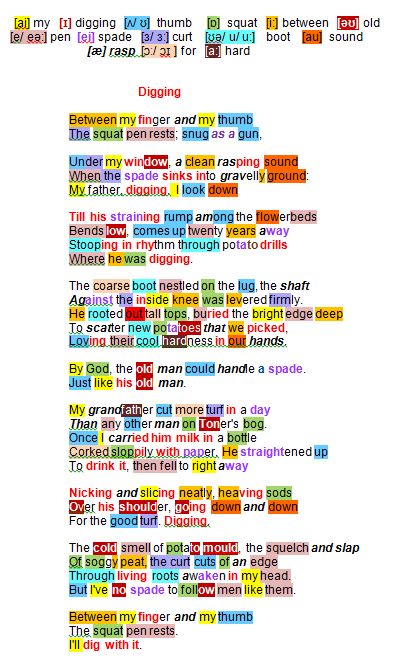