Heaney feeds on poetic charges triggered by a cultural event: ‘Then there was the Viking Dublin exhibit in the National Museum, based on the dig being done by Brendán Ó Ríordáin at the Wood Quay site’ (DOD p.163).

An exhibit Heaney sees arouses his curiosity and sparks off subsequent associations. Heaney gives his imagination free rein in pursuit of Viking links with Dublin and by extension with Irish language and culture.

A museum exhibit invites questions as to its provenance … something human maybe (jaw-bone or a rib) or part of something more substantial (sturdier). Poised to move on (anyhow) the observer’s interest is captured by an original marking (a small outline) scratched into the bone (incised) a squared, rectangular shape (cage or trellis) that invites the imagination to weave its magic (conjure in).

Heaney imagines a child producing the original scoring that takes on a  life of its own –  from the immature lip movement (a child’s tongue) of a youngster forming characters (toils of his calligraphy) into complex intertwinings (like an eel swallowed/ in a basket of eels. The scored line discovers a power of its own (amazes itself), frees itself from its creator (the hand that fed it) and mutates – taking beak-like to the air (a bill in flight) or nose-shaped to the water (a swimming nostril).

Initially improvised on bone the markings developed more complicated designs  – foliage, bestiaries … interlacings as intricate as the criss-cross  maps that traced the Vikings’ daring expansion – routes of ancestry and trade (from southern Greenland to their west, along eastwards along Russian rivers feeding the Baltic, as far as Istanbul).

The pieces swell in the poetic mind (magnified on display) triggering a dramatic transformation: the swimming nostril assumes the elegant swan’s neck shape of a Viking longship feeling its way (migrant prow/ sniffing the Liffey) hiding any ulterior motives from the locals who watch (dissembling itself) behind a cargo of adornments for barter (antler-combs, bone-pins) and the accessories of trade (coins, weights, scale pans).

Heaney pictures the retrieval of the ninth century longship from the muddy banks of the Liffey. It has lain preserved in its Viking provenance (a long sword sheathed in its moisting burial clays) as evidence of the ‘line of ancestry and trade’ it set in train.

The Viking design (clinker-built hull, spined) provides a sonic link with the city now established around it (plosive as Dublin), its overlapping planking, frame and keel resounding with the percussive release of plosive consonants in the city’s spoken form.

The poet’s imagination undertakes an intimate exploration of the ship’s skeleton (we reach in) in search of human remains, bodily shards of the vertebrae, the ribs of hurdle, hidden in the vessel’s private hiding places (mother-wet caches).

The real prize is retrieved (trial piece) the original child-made mark, the link between cultures brought across the sea (buoyant migrant line), the antecedent line.

The agglomeration of history, myth, culture and language emanating from the trial piece is now being inscribed in Heaney’s writing (enters my longhand) by the pen with which he is composing (turns cursive).

The longship’s sea-borne track (zoomorphic wake) burrows into the poet’s intellectual preparation – worm of thought that has left him in murky confusion (into the mud). However he knows of a ‘Scandinavian ’ he can refer to

Heaney is happy to dramatize the correspondences – for Heaney consider Hamlet: a close witness of violence (skull-handler); a revealer of hidden messages (parablist); an assessor of contemporary disintegration (smeller of rot in the state), perhaps infected by it (infused with its poisons); a man shackled (pinioned) between incompatibilities (ghosts and affections … murders and pieties); a man awakening (coming to consciousness) from self-torture that brought him to the point of aberration (jumping in graves) an incertus  torn between pressures (dithering); a gabbler who says nothing of much importance (blathering).

We are invited, Sweeney-like, to share a bird’s-eye view with Heaney (fly) and assess the locals (sniff the wind) as the longship incomers would have done (expertise of the Vikings).

Beyond this, Heaney suggests, they possessed an almost professional (with a butcher’s aplomb) streak of cruelty and lingering death (spread out your lungs, make warm wings for your shoulders)!!

Heaney appeals to the Viking elders (Old fathers) whose blood runs in the veins of what is now Ireland  – skilled at sorting out dispute (cunning assessors of feuds) with a proven track record of military strategy (sites for ambush) and settlement-planning (town). We are a nation in crisis and we need you now (be with us).

Heaney borrows from Act III sc.1 of Synge’s Playboy of the Western World; quotation marks indicate direct borrowing from the original text. John Millington Synge, an Irish comedy playwright and author published the play in 1907; Jimmy Farrell is one of the characters;

A tipsy Jimmy Farrell treats anyone in his bar who is listening to a tale about dead Dubliners. He is fixated on the sheer variation of skulls they have in the city of Dublin. His tale is a rambling concoction (compounded history) to which Heaney adds reference (his words) to the mindset (pan) of his Hamlet figure … and now Farrell’s words ‘an old Dane, maybe was drowned in the periodic havoc wreaked on Dublin by the Liffey (in the Flood’).

Was Farrell right? Heaney’s imagination takes him to the Liffey –  his narrative (my words) an ethereal presence on the waterfront (around cobbled quays) probing like a tongue (lick)  in search of tell-tale signs (go hunting), on tip-toe (lightly as pampooties) – he discovers human craniums disguised as cobblestones (skull-capped ground). 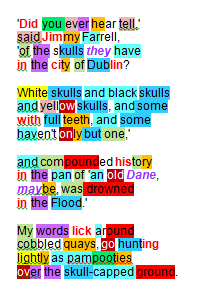