Each panel of the triptych is framed within the sound of rain. Its centre-piece II showcases a fellow Nobel laureate and an academic from Harvard days … the poet reflects on comments they made. The side panels are rain-soaked: in I, as the poet emerges from sleep (then came to), Heaney is visited by mourning voices; in III, as he awaits sleep he likens the mighty power of water to the potential magnum opus rising to the surface of the artistic mind.

The poet’s sleep has been disturbed by the all-night drubbing of rain and the threat of flooding (overflow). His threshold consciousness (I dwelt without thinking) took in its persistent sound (the long moil of it) and daybreak confirmed the deluge (dripping eaves and light).

The words of respected fellow authors have been on his mind (saying into myself) –  attributable comments (Proven) and post mortem (weightless sayings of the dead); his Ulster dialect consoles him: You’ll have to thole.

A man is lost in pleasant thought (reverie), looking out into a waterlogged scene (drenched weedy gardens at the most depressing time of year (late-winter gloom), stimulated by the interior decoration (tangerines) and alcohol (the clear of vodka) … a presence (Pasternak), an ‘interviewer’ and a fly-on-the-wall Irish poet.

The voice Heaney recognizes is tolerant (lenient), rigorous (austere), self-controlled (answered for himself) and cordial (without insistence).

In recorded comments Pasternak  expressed a  feeling of an immense debt to those who supported him in his change of direction from lyric poetry and translating, His perceived duty to make a statement about his epoch resulted in his only novel, Doctor Zhivago judged by  Pasternak  with all its faults to have more value and to be richer, more humane than his early work.

Alternatively (Or), something said as Heaney took leave of a colleague at Harvard who lived in Athens Street. Amidst omnipresent precipitation (thaw and puddles … wet doorstep) Heaney recalls the comments of a scholar of Irish origin still alive in 1991 (William Alfred) with reference to an anonymous absentee who died at sixty.

Alfred’s elusive reference to Summer Tides  hints at a writer whose creative promise (a deepening …something ampler) was cut short … then time for bed … thanks for coming, Seamus, and take care: ‘Ah well/ Good-night again’.

Heaney is listening to a more powerful water-swell (flood … gathering from under), portentous (boding) and waiting (biding) to gush out like a blockbuster masterwork or the work of a leading light (a named name) that cannot be contained (overbrims itself).

In conversation with Henri Cole the poet accepted the extension of the metaphor to himself: I still think I have been inordinately lucky. I regard first of all the discovery of a path into the writing of poems as luck. And the salute that my early poems received and the consequent steadying of direction and identity in my life all coinciding with, as you say, love—I do regard it as a real benediction. And, of course, there’s the whole matter of friendships and family solidarity and the trust of cherished ones. (Paris Review, Seamus Heaney, The Art of Poetry No.75) 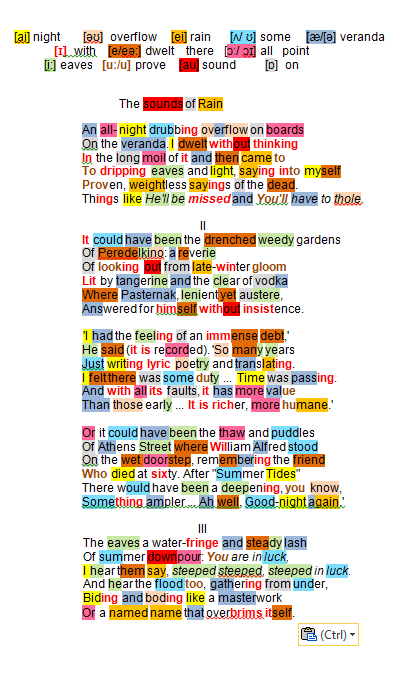