Providing stunning close description of an iconic ‘bog body’ on show in the Moesgaard museum near Arrhus the poem reveals Heaney’s emotional responses to a piece of anthropological history.

Struck by the barbaric treatment revealed by the mummified remains Heaney turns up the volume on links between the fate of Grauballe Man and contemporary internicene violence in Northern Ireland.

The body might have emerged from a mould (as if …poured in tar).  It is displayed recumbent in a bog-land setting (lies on a pillow of turf) with an expression of inner sadness (weep the black river of himself).

The poetic eye moves up and down the body offering a variety of similes to corroborate its at-oneness with the bog that preserved it – comparisons first vegetable then mineral finally animal: the wrist fibres (grain) have the texture of a tree preserved in peat (like bog-oak); the rounded ball of his heel is akin to a basalt egg; long-term immersion in peat water has left the shrivelled instep bloodless (cold as a swan’s foot) and stiff (wet swamp root).

The hips recall the features and textures of the blue-black freshwater mussel, the sharp edge (ridge) of the mollusc’s convex shell, its bulge (purse). The projections and colourings of the spine remind Heaney of a creature that abounds in his mid-Ulster river Bann and Lough Neagh (eel) conspicuous even out of sight (arrested under a glisten of mud).

Heaney works out something troubling him about the head, its unnatural shape the result of barbarous treatment inflicted upon it – its chin has become an abnormal helmet’s visor raised to reveal a gaping vent … the slashed throat of human sacrifice … skin tanned to leather yet retaining the raw deep red of elderberry.

Faced with a paradox Heaney scratches his head: here is something dead (corpse) yet for all the world a model in suspended animation (vivid cast); here is something lifeless (body) as if waiting for the moment to wake up (opaque repose). And what about his gingery (rusted) mane as exceptional as a child born with a full head of hair (mat unlikely as a foetus’s).

Heaney recalls his first sight of Grauballe Man from PV Glob’s photographic records: his delivery (head and shoulder) from Nature’s womb (out of the peat) bearing the marks of a new-born after a difficult birth (bruised like a forceps baby). The grainy image he saw and the vivid exhibit before his eyes (perfected in my memory) down to the most minute detail (red horn of his nails).

The poem’s mood changes abruptly: the aesthetically pleasing bog body (beauty) subjected to a nasty, sacrificial end (atrocity) iscounterbalanced on the other side of Heaney’s scales by an Ancient Roman marble sculpture on display in Rome (Dying Gaul). Sight of an Iron Age victim of tribal atrocity in 55BC or of a barbarian Untermensch unable to escape Roman imperialism (too strictly compassed on his shield) makes the same impact on the poet as contemporary barbarism (actual weight) in Northern Ireland where  blindfolded victims (hooded) are put to death (slashed) and thrown away(dumped).

As the poem’s grisly final couplet reminds us cycles of death and revenge are endemic! 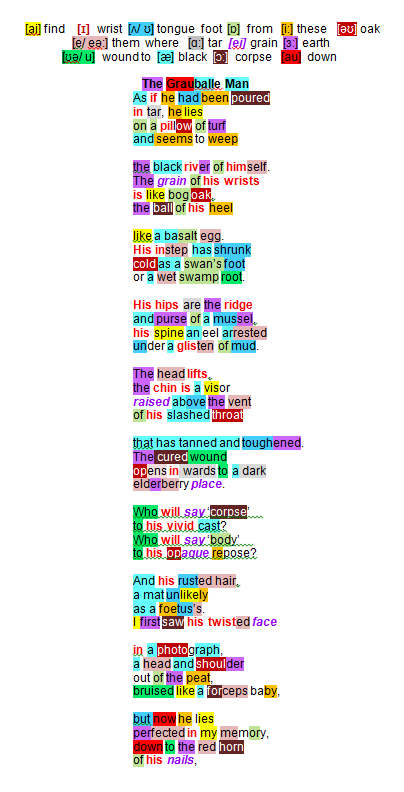 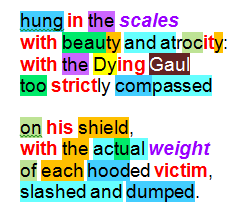