A formal engagement ceremony is about to be celebrated; a young couple wish to get on with the important things in life despite the backdrop of divided Ulster. Heaney and fiancée Marie Devlin, both from mid-Ulster rural backgrounds spent their undergraduate lives in Belfast.

In the troubled Belfast of the 1960s sectarian stand-offs seeking ‘ownership’ of locations were common (gunfire barks its questions off Cavehill). The hill’s napoleonic nose shape (profiled) looks down unerringly (maintains it stare) over the religious and political make-up of wards to its south: hard (basalt) and all things Unionist – self-satisfied (proud)  dominated by non-Catholics like himself (protestant), part of the United Kingdom (northern), run by men (male).

Heaney takes a good natured poke at himself exaggerating the artless innocence of a man who does not know what he is in for (Adam untouched) before exposure to the wiles and ways of a bride-to-be will teach him (the shock of gender).

He is prepared to go along with tradition ceremonial – they still shoot over bridegrooms’ heads on their engagement day, thankfully not in anger (for luck).

So on the betrothal day when Heaney sallied forth (drove out) to face the intimate challenges (bed me down) of Marie Devlin’s space (my love’s hideouts) and her Co Tyrone nature (pods and brooms) a volley of shots was fired in friendship (the ritual gun). 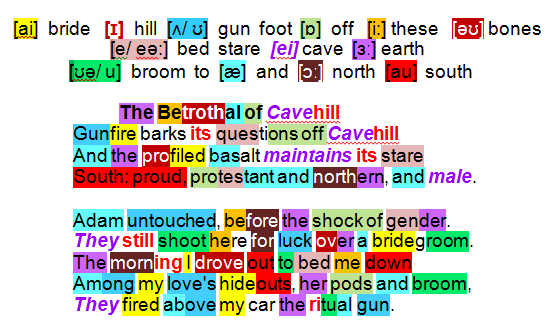