As predicted in the very first poem of the collection Hercules has invaded Antaeus’ space. They meet in single combat: superman versus child of earth, brain versus brawn. Legend has already ordained that Antaeus (Ireland’s ‘champion’ figure in Heaney’s eyes) will be no match for Hercules as the poet points out in his Birthday Speech below.

Hercules the golden boy with the god-sponsored future (sky-born and royal) enters Antaeus-space fresh from Labours fulfilled – snake-choker (the nine-headed hydra); dung heaver (the Augean stables) and preoccupied (his mind big) with his next mission (to steal the golden apples of the Hesperides from the north-African Atlas range) – he is destined to succeed on all counts (his future hung with trophies).

Hercules has already weighed up (has the measure) how to overcome his opponent’s defences (resistance) by thwarting Antaeus of the supernatural properties (black powers) that enable him to regain strength via contact with the earth (feeding off the territory).

Antaeus born of decomposing ground (mould hugger) has outgrown Mother Nature’s ‘breast milk’ and is on his feet (weaned at last). To be thrown to the ground in combat is his trump-card (fall was a renewal) but Hercules is wise to this – his challenger’s intelligence, pointed as a spur of light, plans to pin Antaeus (blue prong graiping him) and hoist him from earth to air (out of his element) dispossessing him and leaving him light-headed (dream of loss and origins).

Antaeus’ restorative-sources – motherly nurture (cradling dark), oxygen-suppliers (river-veins) and conduits (secret gullies of his strength), underground agents of reinvigoration (hatching grounds of cave and souterrain) – are forfeited in defeat and Antaeus’ memorial passed on (bequeathed) to poets who will lament him (elegists).

Heaney dramatizes the bout that brings victory for one and defeat for the other: the unrelenting hoist (remorseless V), the impotent response (triumph unassailed), the draining of strength (powers … shaken), the wrestling holds (lifts and banks), Antaeus held aloft against the Atlas background (high as a profiled ridge).

A powerful man no more, a memory on hold (sleeping giant) – the failed champion who left a meagre food for his underdog race to chew on (pap for the dispossessed). 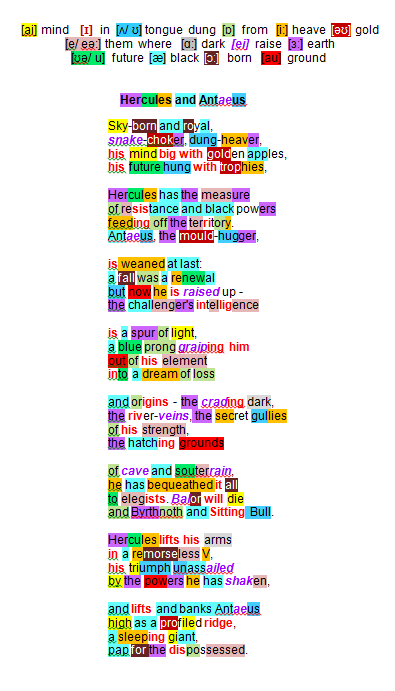 “In Greek mythology, Antaeus was a giant who was born out of the earth and who consequently derived all his strength and prowess from contact with the earth. This meant that every time he was brought to the ground in a fight or a wrestling match, every time he seemed to be beaten, he wasn’t beaten at all; instead, he was gathering strength, recharging his batteries, getting ready to rise again, refreshed and fighting fit.

I identified with this earthman because I saw myself as something of an earthman, somebody with his poetic feet very much on the local ground. At that stage I too felt fighting fit, having just written a book that began with images of a man digging, ‘going down and down for the good turf,’ and ended with my young poet self looking deep into the ‘trapped sky’ at the bottom of a well. I therefore regarded Antaeus as something of a guardian spirit, an emblem of whatever poetic gift I might have. But at the same time I was also aware that Antaeus, for all his strength, was far from invulnerable; I knew indeed that he would be defeated in the end by another hero, the mighty Hercules.

Hercules turned out to be a match for Antaeus in brawn and more than his match in brain, for he realized in the course of their wrestling match that the way to defeat the giant was to hold him high rather than hammer him down. The way to bring him low was to elevate him. So instead of throwing his adversary, Hercules lifted him up until all the strength drained out of him … The import of the story about Hercules and Antaeus is complicated but potent. It tells us that we are made to live in at least two places at one time, in two domains that match each other. We should keep our feet on the ground to signify that nothing is beneath us, but we should also lift up our eyes to say nothing is beyond us.”