Heaney shed light on the genesis of his six ‘dream’ poems in conversation with DOD (p 157): ‘That summer of 1972, the month before we moved (to Glanmore Cottage in County Wicklow)…we did a lot of driving in the south-west of England, saw the white horses carved into the hills, visited Maiden Castle in Dorset and the old earthworks in Dorchester. When we were in Gloucestershire staying in this lovely Tudor manor house where Marie’s sister was then living, I wrote Bone Dreams – the first of those loose-link ziggy-zaggy sequences that would eventually appear in North.

At the time artist friend Barrie Cooke was doing a series of ‘bone boxes’; thinking about them brought up memories of bones I used to find around Mossbawn, so next thing a frolic of free association got started and ended up taking in the whole of Roman-Celtic Britain, from Maiden Castle to Hadrian’s Wall. The chalkiness of the bone, the chalk downs, the amorousness and adventure of that summer are behind those particular ‘dreams’.

The poet’s ‘frolic of free association’ produces an absorbing medley that interweaves items of historic, linguistic and intimately personal interest. Whilst the pieces range far afield both in geography and time there is a basic empathy with Celtic origins and echoes of the theme of Irish dispossession that features more explicitly, perhaps, in other poems in the collection. The allegorical motif of the sequence, that of an Irishman counter-‘invading’ England, is never far away.

The sequence is triggered by the discovery of a bone found on the grazing typical of Heaney’s mid-Ulster farming landscape. The bone’s texture transmits a message of invasion and occupation (rough, porous language of touch).

The bone amounts to an example of nubbed treasure approved by the counselling voice in the poem North, as something the poet knows he can touch and trust.

It is a remnant from the past (yellowing ribbed impression in the grass) a memento mori survivor of Celtic roots (small ship burial), lifeless and petrified (dead as stone), pockmarked  by hard, flaky (flint), bleached evidence of the past as valuable to the finder as gold (nugget of chalk).

Heaney delves into the linguistic remnants and emblems (dictions) contributing to Irish historical experience: the Elizabethan age of canopies, upper-class beds from a 16th century period of Irish occupation by the English; the heraldic devices of the Normans who made their presence felt in 12th century Ireland; back in time past the 11th century ‘courtly love’ age of the troubadours in France’s Provence region, remembered for the aphrodisiac effect of its heat-induced flavours (erotic mayflowers); past the persistent ivied Latins/ of churchmen who via the likes of Saint Patrick in 5th century Ireland carried the Roman language to the four corners of Europe as part of the development of the Catholic church.

The journey ends in the place where the ‘kenning’ might have originated, painting a vivid picture of the linguistic and military clashes of those early times: the sound of poetic narration and bowstring (the scop’s/ twang); the glint of weaponry and the forceful utterance (iron flash of consonants/), the axe-blows of persistent oral recitation (cleaving the line).

‘Ban hus’ inspires a dream of Celtic landscape. The philologist-poet has retrieved the kenning from the treasure-chests (coffered riches) of ancient tongues with their unusual syntax and noun shapes (grammar / and declensions).

The image evokes a picture of human existence in Iron Age times: the rudimentary dwelling (fire, benches, wattle and rafters); the end-of-life superstition of dead souls delaying for a moment (fluttered awhile in the roofspace) prior to transmigrating; the earthenware pot (crock for the brain) of ritual importance to the Celts.

The animal urge to create life was predominant (a cauldron of generation swung at the centre), its kenning-like associations linking basic native lust with the animal-like lairs where the human seed was passed on (love-den, blood-holt). The final periphrastic dream-bower alludes beyond sheer lust to that part of the human mind where pleasures and emotions are registered.

Heaney has come across the bone he catapulted at England. It conjures up a link between a hillside symbol of Celtic carnality and something personal to Heaney intimately related to the landscape in which it occurred. It might be voiced equally to Celtic-British Cerne Abbas Giant and to sexually aroused speaker.

His intellectual foray into philology and kennings now behind him, the speaker is lying in his bone’s lair now figured as a love-nest in the grass. He lies holding a ‘nubbed’ female treasure (my lady’s head like a crystal). Anatomical and geological features linked as touch and sight (gazing) combine, in his mind at least, to arouse the male figure’s senses (ossify myself – become as hard perhaps as the giant’s outsized erect penis cut into the chalk). Compared with Ocean’s rape of the Irish maiden this relationship is a consensual coming-together – he the stony surface of his cut-out profile (screes), she the body shape of the sloping Dorset hillside (her escarpment) – he the chalk giant in intimate contact (carved upon her downs) – he using his hands to excite her erogenous zones (sunken fosse of her spine) before proceeding to her most private parts (passes).

Passions cool but the closeness remains; the couple, real or allegorical, lie side by side (cradling each other) inseparable now from the surrounding terrain (lips of an ancient earthwork). Pursuing the contiguity of anatomy and ancient fortification the male voice casts an x-ray eye (I estimate for pleasure) over the bone structure of the female figure from her hand (her knuckles’ paving) via the articulation of the arm (turning stiles of the elbows) and the indentations of the head (vallum of her brow) to the clavicle (long wicket of the collar bone).

Celtic counter-possession of England looms large: the Celtic male intruder has negotiated historical defensive ramparts (the Hadrian’s Wall of her shoulder) and dare think of overcoming her impregnability (dreaming of Maiden Castle) and completing an impossible reversal.

Heaney’s ‘bone dream’ coda pictures him on a visit to England’s West Country (Devon) and the early morning discovery (the dew still beading it) of a small creature capable of great impact (dead mole). The creature unknown in Ireland is not as he imagined: not the big-boned coulter (referring to the metal wedge immediately in front of the plough that lends it a super earth-moving capacity) but small and cold no larger than a farm workshop tool (thick of a chisel).

Heaney’s inner voice, his interest since childhood in creatures great and small, focuses first on the little points of the mole’s eyes half hidden by the fur on his head and then its anatomy (feel of the shoulders).

The example of nubbed treasure he is examining opens an involuntary link (touched) with a low altitude range of English mountains stretching southwards down the country’s northern spine (small distant Pennines) similar to the mole both in their outer covering (pelt of grass) and anatomy (grain).

The Bone Dreams sequence as a whole 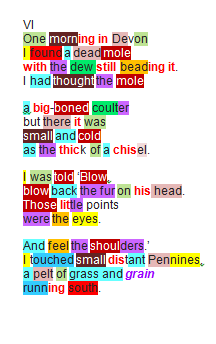