Heaney allegorizes an event recorded on the Moira estate (in Co Lisburn) in the Autumn of 1780 or Spring of 1781 at a time of Anglo-Scottish ‘occupation’. He voices the poem to the first bog body dug up in Ireland.

The Bog Queen’s body lies dead yet sleeping (waiting) at the interface between the peat bog (turf face) in which it is preserved and the boundary of Anglo-Scottish landownership (demesne wall), between Irish peat deposits (heathery levels) below and the non-Irish ‘Keep Out’ signs (glass-toothed stone) above.

Her body bears the marks and messages of Nature’s unseeing trespassers (braille for the creeping influences), the extreme effects of temperature – groped then cooled by the orbiting sun – consumed (through my fabrics and skins) by bad weather (seeps of winter digested me) and untutored plant growth (illiterate roots) that chewed her over (pondered) then declined (died) as they attacked soft tissue and joints (cavings of stomach and socket).

She was living in expectation (lay waiting), her brain stained by the peat (darkening) but very much alive (jar of spawn) and hatching ideas (fermenting underground dreams) alongside precious memories (Baltic amber) of her high-born Viking origins.

Beyond the extraordinary preservation detail of her simple, basic diet (bruised berries under my nails) she regrets time’s detrimental effect (vital hoard reducing) on her regenerative function (the crock of the pelvis).

Her burial trappings are in disarray : the symbol (diadem) of her royalty is falling apart (carious like rotting teeth); jewels have been lost in the bog’s descending layers (bearings of history) – her discoloured regal sash like a black glacier is frayed and tattered, puckering (wrinkling) yet retaining as if tattooed on what remains of her breasts (soft moraines) faded colourings (dyed weaves)  and evidence of exotic goods brought back by Viking traders along eastern Mediterranean shores (phoenician stitchwork). Long winters were survived thanks to comforting thoughts of her Scandinavian origins (nuzzle of fjords/ at my thighs).

The mood music changes – the bog queen relates just how she came to light: violent retrieval at the hands of an unwitting native Irish turf-cutter (nest of my hair … robbed … barbered … stripped) who attempted to redeem himself by reburying her remains caringly and respectfully (veiled me again … packed coomb softly).

She delivers the sting in the tail: the responses of the planted landowners did not match those of the humble dispossessed Irishman. The ultimate violation (peer’s wife bribed him) bought the turfcutter’s conscience, paying him to sever the body from its mother bog (plait of my hair … slimy birth-cord cut).

The mummified body that saw the light of day (rose from the dark) was neither regal nor dignified – mutilated (hacked bone, skull-ware), wretched (frayed stitches, tufts) an undersold remnant of history (small gleams on the bank). 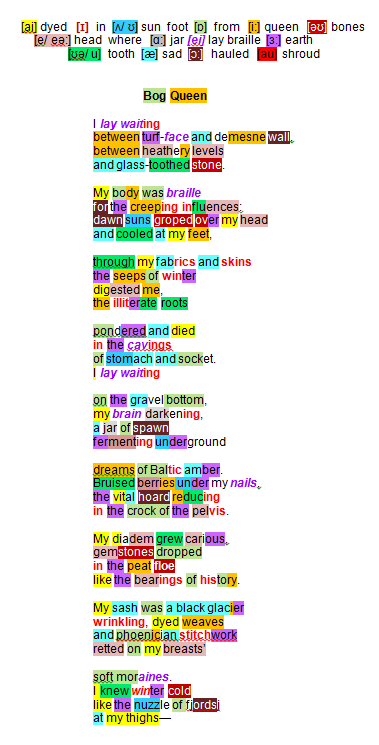 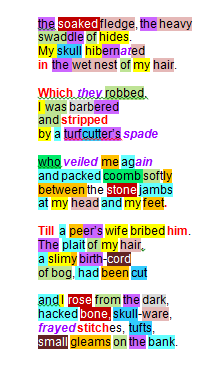