in memory of Joseph Brodsky

Heaney pens a last message of respect, admiration and affection for a deceased friend and fellow Nobel Laureate whose ‘exhilarating’ company he had much enjoyed. He summed up his feelings in a posthumous tribute published in the New York Times: I first met him passing through London in 1972 on the second leg of his journey from dissidence in Russia to exile in the United States; he was a verifying presence. His mixture of brilliance and sweetness, of the highest standards and the most refreshing common sense, never failed to be both fortifying and endearing. Every encounter with him constituted a renewal of belief in the possibilities of poetry.

Clues and connections: Yeats and Brodsky both died on the same day in 1939 and 1996 respectively; Auden wrote an elegy ‘In Memory of W.B.Yeats’ in 1940; ‘On Grief and Reason’ is the second volume of Joseph Brodsky’s essays, and the first to be published after he was awarded the Nobel Prize for Literature in 1987; this volume and Brodsky’s Nobel lecture include comments on political exile in one’s own land – Brodsky was exiled to a swampy farm near Archangel, north-east of St Petersburg and across the White Sea from Finland; Auden was instrumental in helping Brodsky get to America after he was expelled by the Soviet Union and helped him to settle.

Heaney’s emphatically positive introduction (Joseph, yes) of a fellow rhythm-tapper (tum tee, tee tum, tum and so on – you know the beat) brings in Yeats’ elegist (Wystan Auden) another metre beater (marched to it … metric feet … unstressed and stressed) whose ‘In Memory of W.B.Yeats’ poem of 1940 laid William Yeats to rest.

The date (January twenty-eight) is both deceitfully negative (double-crossed) and a day of doleful funeral processions (death-marched) for the passing of Brodsky and Yeats.

Heaney has gone back to a format (I tread again) à la Auden (-esque) using metre and rhythm familiar to the man (measured ways), a recognisable pattern – self-limiting perhaps (quatrain by constrained quatrain) but entirely suitable to transmit themes (meting grief and reason out) that Brodsky regarded as the duty of poetry (as you said a poem ought).

Deliberate use of a rhythm that inverts the stress (trochee, trochee, falling) is tailor-made for current sentiments (grief and metre order us).

Brodsky the university professor insisted his students recite poems by heart (repetition is the rule) and, as Heaney notes in ‘Finders Keeper’, was fond of putting a twist on the words of others (spins on lines we learnt at school).

Heaney is faced with a double dose of cold in the poet and the world: the cold reception Yeats’ remains met on their return from France in 1939 (Dublin Airport locked in frost) and Brodsky frozen stiff in death elsewhere (rigor mortis in your breast).

Death (your heart a frozen well) is irreversible… no way back – neither hand-tool nor printed page (ice no axe or book), neither warming, gentle classical tone (no Horatian ode) nor sign of creativity (poetic foot imprint), neither skilful poetic variation (quatrain shift), nor creative surprise (couplet dint) … not the thought of what it took to survive internal exile on a wintry waterlogged farm with a seraphic name  (ice of Archangelic strength), nor the deceitful weather of January (this hard two-faced month), nor the ultimate Satan grip of ice like Dante’s in deep hell.

In life a warm-hearted sharer in the green room (once in Western Massachusetts … the reading due to start) Brodsky came hip-flask-laden for them both (pepper vodka … warmed my spirits and my heart).

Now dead, no spirit (vodka, cold or hot) no ‘water of life’ (aquavit or uisquehaugh) can restore the signs of life (blood back to your cheeks), or alter his political incorrectness – the colour to your jokes that rode roughshod over sensitive issues involving sex and sect, irrespective of other people’s feelings (everything against the grain) – or temper Brodsky’s addiction for alcohol and nicotine (drinking, smoking like a train).

Heaney re-lives or invents (the incident goes unrecorded in DOD’s Chronology of Heaney’s schedules) a harmonious rail journey in each other’s company, heading west for Tampere in Finland that brought together their writerly interests and natures (swapping manuscripts and quips), their super-sharp intellects (both of us like cracking whips) and sense of relaxed competition (sharpened up … making free).

Heaney reports the irony: Brodsky’s exile in 1972 was for him a liberation that took him westwards to America; paradoxically the repressive political ideologies that would eventually constrain him, put him on trial and condemn him had entered Russia out of exile by train more than half a century earlier in 1917 (Lenin’s train-trip in reverse).

Heaney enumerates what he best remembers of a man now lost forever (nevermore): his capacity to garner information rapidly (wild speed-read); the ruminative pose (tilted head); the sudden launch of intellect (deck where mind took off), his ready access to mischievous word-play (that rush to pun), his brisk (hurry through) de-cluttering of stylistic obstacles (yon jammed enjambements piling up); the way he fearlessly took the fight to the communist threats against his voice and person (you went above the top), his standing-proudness (nose in air), his all-systems-go use (foot to the floor … revving English like a car) of a language that was not his own (hijacked when you robbed its bank) and used in preference to his mother tongue (Russian was your reserve tank).

Heaney delivers a final valediction (his gist though not his words) … ‘So Joseph’, says Heaney to him, ‘your treasured legacy (worshipped language) was powerless against old age and unhealthy life-style (damage time has done to you); your tersely expressed belief (peremptory trust) in the supremacy of what sits on the page or in the mouth (words alone) has reached its coda (bites the dust)’.

‘Maybe you are still there somewhere’ – Heaney turns to the twelve tablets of a Sumerian epic according to which Gilgamesh rejected that irreversible mortality was Man’s lot (dust-cakes … feed the dead) – ‘so If you can still hear me JB’ in your elsewhere world, says Heaney, then ‘tuck in’ (be their guest) ‘go on doing what Auden said good poets do – maintain your trenchant tone (bite) however minimal the rations (break their bread).’ 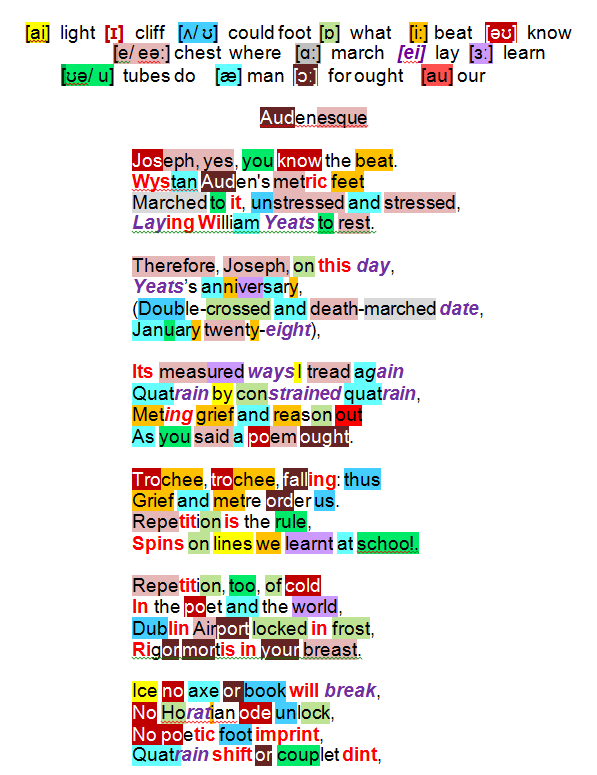 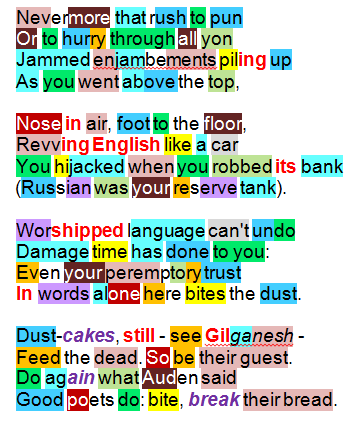