Allegorizing on the pun of ‘union’ as an act of sexual as well as political ‘congress’, Heaney reflects on a historical enactment imposed upon Ireland by the British government in 1801 and the gap between what was anticipated in Westminster at the time and the turbulent reality it has delivered.

Heaney offered insights to DOD (p 169-70): The ‘speaker in the poem’, whoever he is, is deeply aware of his implication in being ‘imperially male’. He lies like the island of Britain beside an expectant mother island who has her back turned to him. He’s experienced a certain guilt at having caused the pregnancy.

Far from creating a bond, the child born of union forced upon the maid of Ireland carries within it the seeds of anger and rebellion.

A birth is imminent (to-night). Its symptoms point to a human delivery – a baby kicking (first movement), the pulse of a heartbeat. Allegory intervenes: the ‘maternal’ fluids preparing to burst take on an unmistakeable Irish correspondence (rain in bogland gathered head to slip and flood) – it is the peaty, waterlogged Irish landscape in labour (bog-burst) and about to deliver (gash breaking open the ferny bed).

In an allegorical sequel to Ocean’s Love to Ireland the couple married by the Act of Union lie physically and geographically side-by-side – a bird’s-eye-view of the British and Irish land masses lends itself to the image of two recumbent figures.

‘He’ is England addressing female Ireland with her back turned coldly towards him (firm line of eastern coast) with limbs stretching westwards (thrown beyond your gradual hills).

This has been a stormy gestation (the heaving province where our past has grown). ‘He’ demonstrates affection (I caress) for her pregnant ‘lump’ but identifies his English dominance (the tall kingdom over your shoulder) open neither to soft soap on her part (cajole) nor cold-shoulder (ignore).

In a sudden confession he disowns erroneous political belief in the benefits of invasion (conquest is a lie).

Experience (I grow older ) has recognized the differences of coexistence (half-independent shore) and recognition that the pregnancy he has brought about will bring him to a point of no return (my legacy culminates inexorably).

Heaney adopts the voice of that erstwhile Ralegh figure (I am still imperially male) who has left his pregnant maiden to face alone the trials of delivery (pain).

It will deliver a turbulent aftermath in Ireland (rending process in the colony) if the child’s eagerness to leave the womb is to be believed (battering ram … boom burst from within).

The physical and political act launched an undermining faction (sprouted an obstinate fifth column) with a powerful singularity of intent (growing unilateral).

The pre-natal signs (heart beneath your heart) forecast hostilities (wardrum) and calls to arms (mustering force). Still dependent and untutored (parasitical and ignorant little fists) the foetus demands release from the womb (beat at your borders) already pitted in defiance, a firearm cocked against an enemy.

More than two decades before the Good Friday Agreement Heaney’s speaker ‘whoever he is’ can conceive of no political solution (no treaty) freeing Ireland from the scars of violation (tracked and stretchmarked body) and the wounds of ‘child-birth’ (raw, like opened ground) such as has been the nation’s repeated fate: again.

Background: following the Irish Rebellion of 1798 the British Prime Minister William Pitt the Younger decided that the best solution was a union of Irish and the British parliaments: the Irish Parliament would be abolished, and Ireland thenceforth represented at the Parliament in Westminster, London. Pitt argued that this would both strengthen the connection between the two countries and provide Ireland with opportunities for economic development. It would also, he thought (mistakenly), make it easier to grant concessions to the Roman Catholics, since they would be a minority in a United Kingdom.  The subsequent Act of Union came into effect on Jan. 1, 1801 creating the United Kingdom of Great Britain and Ireland. The union remained until the recognition of the Irish Free State (excluding six of the counties of the northern province of Ulster) by the Anglo Irish Treaty concluded on Dec. 6, 1921. 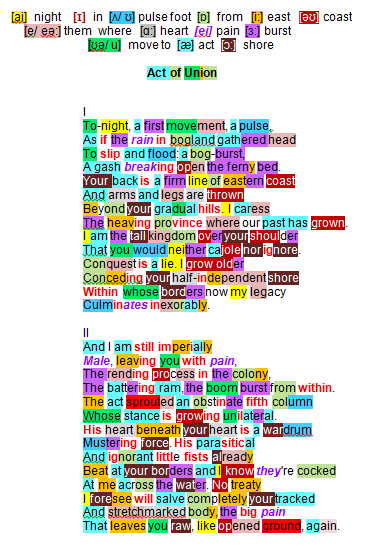