Heaney was in Spain at the very moment riots were exploding on the streets of Belfast. His personal discomfort (I was suffering only the bullying sun of Madrid) paled into insignificance when compared with RUC (constabulary) using firearms against Catholic communities (deemed mob) around the Falls Road.

His personal daily schedule included some serious reading (life of Joyce) as he cooked slowly (casserole heat), unable to escape foul odours (stinks from the fishmarket) that reminded him of his Castledawson origins (reek off a flaxdam).

Evening brought tastes of Spain (gules of wine), youngsters heard but not seen (sense of children), elderly widows (old women in black shawls) enjoying the freshness of evening (near open windows), the sounds of Castilian rising up from below (the air a canyon rivering in Spanish).

Discussions as the ambled around (on the way home) talked of the central meseta plateau (starlit plains) and the shady presence of the Guardia Civil whose polished turn-out (patent leather … gleamed) did not obscure its fascist role in recent Spanish history (like fish-bellies in flax-poisoned waters).

One voice, whoever’s it might have been, urged Heaney to concentrate on his own country (go back … try to touch the people). A second warned him that poets who poked their noses into the political processes fared badly in fascist Spain (conjured Lorca from his hill).

In conversation with DOD Heaney summarised Lorca’s ‘impulse to show solidarity with the people’ and his ‘wariness of party lines … a victim figure … poet as free spirit, committed to the cause of liberation … conceived of as the enemy’ (181).

Victims in the Falls Road (death-counts) and news from the Plaza de Toros (bullfight reports) shared the television highlights; visitors turned up who had been on the ground in Belfast to remind him of the immediacy (from where the real thing still happened).

In  need of relief Heaney sought refuge in Madrid’s Prado art gallery … he escaped the heat of day (cool) perhaps but if it was peace he was looking for then maybe he chose the wrong place!

Heaney later explained to DOD (182) that he was not seeking out the Goya pictures that figure in the poem but when he saw The Shootings of the Third of May ‘It was Bloody Sunday avant la lettre’; the other canvases possessed ‘the force of terrible events’.

Even more traumatic was to follow …  in the next gallery, chosen from  Goya’s Black Paintings originally painted on the walls of his home now transferred permanently to the Prado (grafted to the palace): first a demented, anguished classical Saturn set against a seething background (dark cyclones gathering and erupting) engaged in infanticide (jewelled in the blood of his children); then sky-bound gigantic Chaos in profile turning his brute hips on the world beneath; finally holmgang – Duel with Cudgels (two berserks) – showing two peasants fighting each other with their legs stuck in a quagmire (greaved in a bog), unable to escape from one another (sinking) without beating their opponent to death. In Spain’s violent civil war of the time the only way forward for each side was victory. Their perceived purpose (honour’s sake) pitched Heaney back intothe insane cycle of murder and revenge currently visited upon Northern Ireland.

Heaney finds the metaphor to describe this unmistakably Spanish painter, likening Goya to a matador with a rough, uncompromising style (fists and elbows) haunted by his own demons (stained cape of his heart) needing to deploy all the artistry at his disposal to avoid violent death at the hands of the deliberately goaded bull of contemporary events (as history charged). 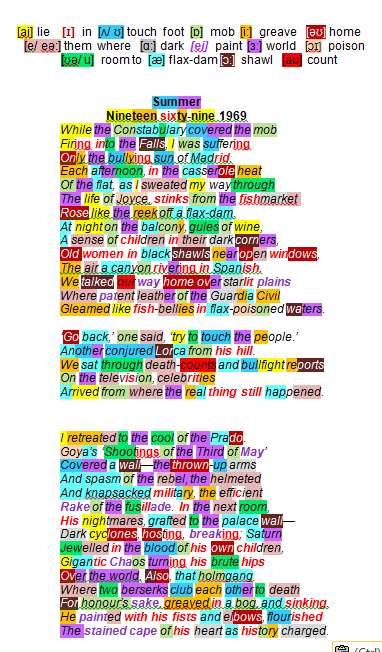