The poem is a tour de force – a simple and hugely atmospheric vignette depicting an incident in the life of a minority Catholic farming family in a Protestant-ruled province called Northern Ireland. What we know about the principal actors renders it unmistakably autobiographical – fly-on-the-wall boy Heaney senses his father might be attempting to deceive authority but gives him the benefit of the doubt.

Heaney provides the ingredients of a compelling psychological drama: an atmosphere of threat; an attentive youngster; an interrogation; a father’s lie; a moral dilemma that tests the innocence of the listening boy; the threat receding. The ‘poet-film-director’ employs all the zooms, pans and slow-motions of cinematic technique.

The boy’s eye is the camera, his ear records the sounds.

The first two stanzas follow the child’s visual curiosity: he examines a visitor’s bicycle in close detail – a standard-model, robust and immaculately turned out, from its multiple protection of a minion of the law in inclement weather (rubber cowl … mud-splasher … mudguard) to its dynamo (spud). The boy notes tiny features (fat black handlegrips … pedal treads hanging).

A sense of threat is injected: the dynamo he is inspecting (out of use during daylight) is cocked back just as the firing lever of a revolver or the safety-catch of a ‘spud’ shaped grenade might be in menacing circumstances. The child’s ‘eye’ comes to rest on pedals that reveal the authority of the rider (the boot of the law).

The policeman has been admitted to the home and the child learns what he can from his peaked police hat (cap) –visible marks indicating that it is tightly fitting (line of pressure ran like a bevel) and that cycling a heavy bike is physically demanding (slightly sweating hair). Beyond that the constable remains an embodiment rather than a ‘face’.

The constable’s mission is revealed by his heavy ledger with its specific record of farm yields (tillage returns in acres, roods and perches); accurate figures (arithmetic) will be cross checked to establish the honesty of income-tax returns (fear).

Still visually preoccupied with the officer’s power the boy knows that a firearm is sheathed in the polished holster; his eye follows a slow-motion route from buttoned flap and braid cord to the weapon itself (revolver butt).

Half listening to the dialogue his ear suddenly pricks up … there is something not quite true in his father’s response.

Deliberate or accidental? Boy Heaney spells it out to himself in a rhetorical question (was there not a line of turnips where the seed ran out..?) but says nothing. Though ‘good’ the boy is not innocent: he can differentiates between ‘truth’ and ‘fib’ (assumed small guilts) and has been taught what happens to liars who are found out (the black hole of the barracks).

As, in his slow, methodical way the officer prepare to leave, the boy has time to assess another symbol of enforcement (baton-case) and the almost medieval record of rural crops (domesday book) he is carrying.

The constable’s eyes pierce the boy’s soul (looked at me).

The final preparations completed (shadow bobbing) the officer remounts his bicycle. Heaney describes the melting of tension in a musical ‘morendo’ as the sound of the departing bicycle dwindled and died: ticked, ticked, ticked.

No word on the topic is exchanged between father and son. 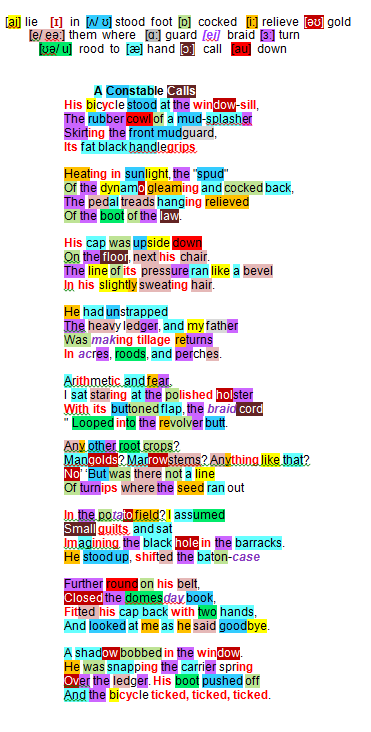