Heaney identifies two systems that brought their repressive regimes to bear on him as an individual with a mind of his own. Such was the trepidation that their rules of conduct generated that in the poem he reprises the notion of incarceration in The Unknown Legislator’s Dream. Though the piece is bedded in Heaney’s real-life experiences in Ireland the title alludes to the bureaucracies of oppressive states in post WWII Eastern Europe. Sandwiched between them is a short account of Heaney’s red-blooded male frustrations!

The initial interjection (well) announces that Heaney is poised to speak – of events from his personal biography – his important places borrowed from Patrick Kavanagh’s Epic of 1938.

His first ‘monument’ (in the Yeatsian sense) is St Columb’s College in Derry where billeted as a soldier in some foreign place Heaney lived out his secondary education. The school set on a steep prominence (lonely scarp) – Heaney transfers the epithet, he was the lonely one – overlooked the neighbourhood where Seamus Deane was born (your Bogside).

This first-year secondary-schoolboy exiled from his rural Mossbawn background was faced with unbelievable contrasts (new worlds) – things that went on after dark (floodlit dogtrack), hoarse, raucous cries of its race-night punters (inflamed throat of Brandywell), his sensed acceleration of the electrically driven dummy that sparked the greyhounds into action (throttle of the hare).

He confesses to having felt rejected and anorexic yet still  the enduring prick of conscience (act of stealth) at throwing well-meant rations away good (biscuits to sweeten my exile)  He is recalling a date, a place, a moment, a time of day and the lyrical autumnal effects of street lighting (lights … amber in the fog).

Life took him on to the sophisticated undergraduate experiences of Queen’s University (Belfast) and top-of-the-range American University (Berkely)  both singing schools … of unageing intellect in the Yeatsian sense.

Alongside education was the rise of the poet (dabbling in verses till they have become a life): the painstaking search for a publisher; the contrasting signs of ‘getting there’ from the bulky envelopes of manuscripts to the slim volumes of the finished article, free copies offered proudly to friends and contacts (despatched ‘with the author’s compliments’).

You, Seamus Deane, he suggests, left me in awe (bewildered) with those pieces torn (wire spine) from your exercise book: assonance and intellect (vowels and ideas) uninhibited expression (bandied free), imagination germinating  (seed-pots blowing off our sycamores).

Heaney’s dedication is not there for him to blow his own trumpet. His first attempts at poetry (I tried to write) echoed the land whence he came (South Derry rhyme), the amateur, clumsy efforts of the yokel from beyond the Sperrins (hobnailed boots from beyond the mountain) ‘sinfully’ trampling (walking, by God) the English he was being taught at a school itself known for its well tended swards (the fine lawns of elocution).

How deliberately, Heaney asks, did his school inflame sectarian sensitivity: the alleged superior diction of Protestant schoolchildren peddled by teachers – counter-productive (inferiority complexes) and crass (stuff that dreams were made on).

A daring, almost comic exchange confirming that Heaney was capable of mild impertinence to his teachers also risked exposing him from the very beginning (on my first day) to the prospect of corporal punishment (leather strap) administered with gusto by senior staff (epileptic in the Big Study), there for all to hear (plashing) and not to forget (bowed heads).

Heaney’s letters home told a different story, were filled with litotes (not so bad) and were in line with Heaney-the-man’s same qualms about making public declarations on sensitive ‘political’ issues for which he regularly chided himself (shying as usual).

And so to a second mini-drama more to do with social mores before coming face to face with a daily obstacle to Northern Irish freedom of movement.

The period after Heaney passed his driving-test was empowering (I came to life) – testosterone and dating (the kissing-seat of an Austin Sixteen) … without long-lasting farewells of course (engine running) since groping and grappling after dates (fingers tight as ivy on her shoulders) fell foul of a strict 1960s’ moral code and parental authority (light left burning for her in the kitchen).

The shortening days heralding the return to Autumn studies (loss of summer’s freedom) and the lyrical appreciation of his surroundings enhanced by what Heaney might just have been up to could suddenly be shattered by roadblock –  most likely armed Protestant RUC men ordering him to stop (crimson flashlamps … muzzle of a sten-gun in the eye).

Like Graham Greene, who provides a similar title, Heaney possesses a huge sense of drama and screenplay.

He gives vent in the present moment of his poem to his disrespect for the bovine threat of the policemen (black cattle, snuffing and pointing) but was wise enough not to say much at the time all the more since his first name was an automatic Catholic give-away.

The constables felt empowered to handle Heaney’s personal belongings at will, including pieces written in Deane’s cryptic style (hieroglyphics) that were beyond their appreciation (‘svelte dictions’) and typical of Deane’s penmanship (very florid hand). Heaney objects to his friend’s creative talent falling into the hands of brutish agents of repressive control (Ulster was British, but with no rights on The English lyric).

Heaney finds his title for the pervading atmosphere (all around us) hitherto unlabelled (we hadn’t named it) via an allusion to an organ of repressive totalitarian governance (the ministry of fear). 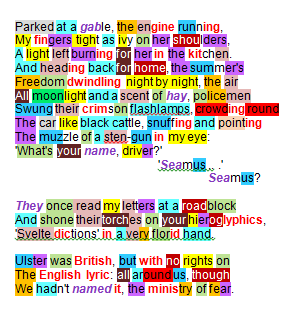